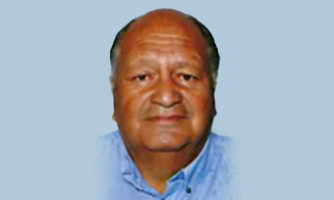 Harness Racing New Zealand would like to send its condolences to the whanau of Rex Peni who died last week. On his own account he trained 12 winners from 160 starts (2011-2022). His most prolific winner was McDaknife, who he also bred. McDaknife won five races and was Rex's last winner, at Cambridge on January 26 2020. His first winner was Lee Mer at Cambridge in 2011, while Grey Stoke was another of his good performers. He raced Grey Stoke with Morrinsville trainer Leanne Edwards who described his death was "devastating". They had purchased a number of yearlings and had planned to "give it a crack this season." Fellow trainer Andre Poutama who drove for Rex over the years remembers him as "nice friendly guy who was in the sport for a good time and to make memories." Rex Peni was 70.

A celebration of the life of harness racing stalwart Jim Dalgety will be held at Addington on Wednesday, May 4.The Dalgety family welcome anyone who would like to reflect on Jim’s wonderful life and career to join them at the Christian Cullen Lounge at 1pm. Refreshments will follow the official proceedings.

Former Kiwi Funatthebeach has won the prestigious $US549,000 Borgata Pacing Series Final at Yonkers Raceway.Bred by well-known rugby and racing couple Caroline and Braeden Whitelock the seven year old won nine from 31 in this country before heading to Australia in 2019. The winning time for the mile in New York was 1:50.1. He was 6/6 in the betting in the eight horse field and paid $22.30 for the win.

Tony Morgan has become just the second North American driver to notch up 17,000 wins. The 63-year-old brought up the milestone at Harrah's Philadelphia at the weekend. Only Dave Palone has driven more winners - his total stands at 19,924. In contrast New Zealand's most successful driver yet Tony Herlihy has had 3615 wins.

With nine wins in April so far Team Telfer has cleared out to a 8-win lead in the trainers' premiership for 2022. The inter island operation of Steve and Amanda Telfer have 42 wins so far, with Michael House and Mark Purdon and Hayden Cullen second on 34. While the Telfers have won stakes totalling $570,690 the Purdon-Cullen combo have easily made the most money this season with their total standing at $1,445,846.

The latest standard.gavelhouse.com auction closes at 7 pm tonight. There are 13 lots in the auction including She's A Dagg who's had one win and three thirds in 31 starts. Four-year-old mare Pembrook's Princess is also attracting plenty of interest.

There will be winners galore when Diamonds Day, one of the south’s premier harness race meetings, takes place at Ascot Park Raceway in Invercargill on Saturday 30 April. Fittingly a diamond ring, valued at $4200, courtesy of Coats & Schuck Jewellers and the Invercargill Harness Racing Club, will be up for grabs. Ladies will also get their first glass of wine free on race day.