Near perfect day for Telfers

It was a near perfect day at Methven on Sunday for trainers Amanda and Steve Telfer.

They took just two runners to the grass track meeting and came home with a win and runner-up result courtesy of Aardie’s Express and Mr Perfect respectively.

Aardie’s Express was having her first start in the South Island after winning on debut at Cambridge Raceway earlier this month and her trainers were confident of a good showing in the “Lather Up” Little Green Jug 3YO Mobile Pace (1609m).

Driver Tim Williams was able to secure and early one-one position with Aardie’s Express before he elected to press the filly forward going down the backstraight to sit outside leader Ideal Dance.

From there the daughter of Always B Miki was able to run away to a 1-1/2 length victory, maintaining her unbeaten streak.

“She went well,” Amanda Telfer said. “We were only going to trial her but we saw that race (and opted for that instead).

“She toughed it out and went well.”

While pleased with her first-up win in the south, her trainers now hold loftier ambitions with the filly.

“She has come down and has done everything right,” Telfer said.

“She will probably target the Supremacy Oaks races down south.” 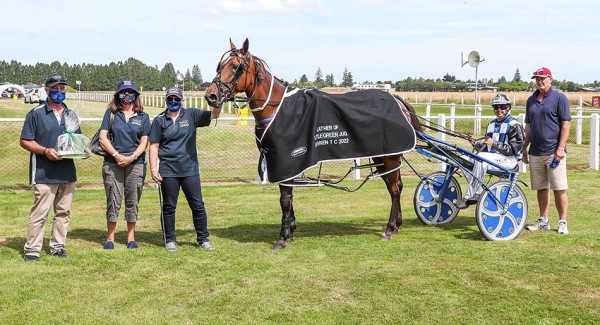 “We nearly had the perfect day,” Telfer said.

“Mark (Hurrell) drove him well and it was a nice result.”

The Bettor’s Delight gelding is another who has been performing well in the south for the dual-Island stable, placing in both of his southern starts to date.

“You didn’t think much of his form (prior to heading south) because it was in the lower North Island, but he has backed up really well down here,” Telfer said.

“We will probably look for another junior drivers race for him now.”