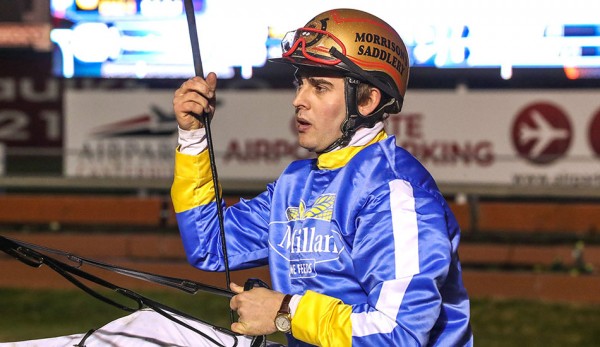 John Morrison made a nearly perfect start to clinch an early lead when the New Zealand Junior Drivers Championship got underway at Addington on Thursday night.

Morrison went down to early runner-up Sheree Tomlinson by the barest of margins in heat one before going one better in the second of two opening night heats.

Morrison has had a few cracks at the championship and has had plenty of placings before, but in his final year as a junior driver the reinsman broke through for a heat win.

“It was good to get that out of the way, I almost thought for a while there I might just be running placings all of the way through.”

In her first, the Greg and Nina Hope trained mare gave Ricky May his 3000th win in New Zealand in another professional performance.

“Greg and Nina do a great job – two starts for two wins and they were both stands it’s a great effort,” Morrison said.

“She’s a lovely horse and she will probably be a nice horse around the feature racing time in those graded races.”

Morrison wasn’t the only driver to snare a maiden win in the New Zealand Junior Drivers Championship.

Sheree Tomlinson broke through in heat one of the series when she nosed out Morrison in the closest of finished to race 2 behind Takemybreathaway.

Tomlinson was delighted not only to secure her own victory but also to notch a win for trainer Fred Scott.

“It was a tight finish, but we got there in the end, which was good.”

“It was great for Fred to get that win, it’s his first penalty free win as a trainer and my first win in the New Zealand Junior Drivers Championship.”

Scott also produced dual gaited veteran Take After Me to run second to Sheeza Artist in heat two with Sarah O’Reilly in the sulky.

That result and O’Reilly’s sixth placing in heat one have her sitting in third position in the series standings after the first two heats of the five heat series.

Naturally, O’Reilly was delighted to reach the milestone.

“I never thought I could ever get that many in a season.”

O’Reilly’s 100th win was made more special as it came behind a horse the reinswoman had formed a special bond with at Cran and Chrissie Dalgety’s stable.

The final three heats of the New Zealand Junior Drivers Championship will be run at Addington on Sunday.