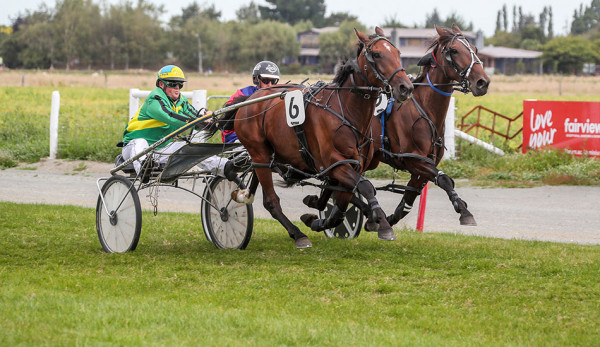 Trainer Steven McRae’s three-horse team just need to hold their form to cash in at Westport on Friday.

McRae is quite confident Gayle Force is a future country cups winner but whether it is at Westport on Friday is another matter.

“It has been a bit of a slow burn, it is a bit of a cliche but I do think he is still six months away,” McRae said.

“He works at home like quite a nice horse but sometimes when he gets to the races he doesn’t always show it.”

“Friday’s race will be a good test for him.”

“He will have a couple of starts at Westport and then I think I will chuck him out for a couple of months.”

“I would like to think he will be quite a nice country cups type horse when he comes back in.”

Gayle Force comes into Friday’s feature after stepping away nicely before going on to win his last start at Methven.

Another clean beginning to land handy to the speed on the usually leader dominated Patterson Park track will be the key to his chances on Friday.

“A couple of times he has fluffed it – not badly – he has stepped away like he is going to be handy and then he has jumped out of it,” McRae said.

“The other times he has begun really good and has been in the first two or three.”

“I think that is what his race is going to come down to.”

“The first 100m will probably tell the story with him.”

Nikol Franco goes into race 7 with a similar mission to Gayle Force – to step away quickly and land handy to the speed.

The three-year-old did exactly that when winning her debut at Addington last month.

“Without being too derogatory I don’t think she beat too much of a field at Addington,” McRae said.

“It is quite a sharp step up, there are a few horses in there like Madame Frost who have won quite a few races.”

“They are probably on top of their game and a bit more well-rounded.”

“She is similar to Gayle Force, if she can step away and jump to the front she would take a bit of catching but she couldn’t afford to miss away.”

Swedish Franco sped off the gate to lead and win her debut at Cromwell and January.

The same plan could apply when starts from barrier 7 behind the mobile in race 10 on Friday.

“She is drawn just a bit wider than we would have liked to,” McRae said.

“But she has got good gate speed and I think she is probably going to have to use it.”

“We will probably have to pull the trigger and try to get across them and try to hang on.”

Gemma Thornley will take the reins behind Swedish Franco.

Harness Jewels star Double Delight is still rated a chance to make next week’s Northern Trotting Derby even after missing the obvious lead-up at Alexandra Park this Friday.