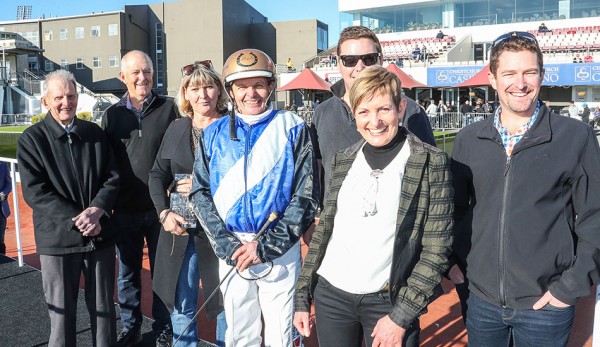 Ricky May added another chapter to harness racing’s greatest comeback story when driving his 3000th New Zealand winner at Addington on Sunday.

The star driver’s milestone victory appropriately came at the track where his brilliance in the sulky has shone brightest, the scene of his incredible seven New Zealand Cup wins.

Known as arguably the greatest driver of swoopers this country has seen, May’s hundreds of successes are full of perfectly judged front running drives.

And the 63-year-old produced another, behind Sheeza Artist to score a 3000th win which looked impossible after his heart stopped during a race at Omakau just 19 months ago.

“It was pretty hard coming back from what happened to me, it has been a bit of a battle,” May

“But I have managed to get better and better with the help of everyone.”

May’s 3000th victory came for one of the key stables in his glittering career, the Greg and Nina Hope barn.

Though Sheeza Artist was well backed, the reinsman admitted he was not as confident going into the race as punters appeared to be.

“She was pretty well backed but I wasn’t as confident as the punters must have been.”

“It is great to be able to do it with Greg and Nina, we have had a lot of winners together over the years.”

“And I have driven a lot of winners for (owner) George Hill too, even back when he was training.”

May admitted it was nearly impossible to pick a career highlight from his 3000 wins in New Zealand and his many successes in Australia.

The reinsman rates Inky Lord’s incredible recovery to win the 1989 New Zealand Cup right at the top of his list of biggest thrills.

But May also said after driving superstar after superstar it would be unfair to each of a line of incredible horses to rate one ahead of another.

“Everyone asks me but Inky Lord’s first cup is right up there, because it was my first cup.”

“He got checked at the 500m mark and lost so much ground, it was pretty special that he could get up.”

“But really there are so many highlights it is hard to pick one out.”

“Terror To Love, Monkey King, Monbet and Mainland Banner are all right up there.”

Reaching 3000 wins was a clear goal for May following his recovery from his near-death experience at Omakau last year.

Now that he has become just the third driver to win 3000 races in New Zealand – alongside fellow champions Tony Herlihy and Maurice McKendry – the star reinsman admitted he is not sure what is next.

“I will just keep on going really, I am still quite enjoying it.”

“I will just take it as it comes, but to be honest where does it end? I am not sure, really.”

Already an incredible occasion, May’s 3000th win was made more special by being greeted by his family, including wife Judy and father Terry, when he returned to the Addington winner’s circle.

The reinsman was also given a rousing reception by his peers.