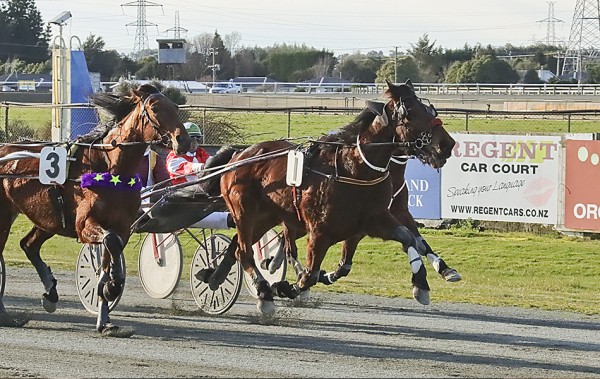 After putting a tumultuous season behind him trainer Shane Matheson started the new term off in grand style with the win of Harry H at Ascot Park on Thursday.

But away from the track the past six months have been challenging for the couple after they were involved in a serious road accident.

Barrie emerged with injuries as did Matheson who had, among other issues, sustained major damage to his right shoulder.

The problem threatened to leave him with little use of his right arm – crucial in training horses and in running his crutching business.

Matheson underwent a lengthy shoulder surgery that had no guarantees of success.

The operation has been deemed a success and the trainer has been making good progress since.

“I am getting around better, I had an assessment this morning,” Matheson said.

“My shoulder is getting better, but it will be another six months.”

“I still have my moments because of the concussion, I have just got to stop and slow down when it happens.”

“It is a bit like a compressor, you have got stop and press restart, it is almost like that.”

Harry H might have looked in his element out on the track in race 6, sitting in a perfect spot in the trail for driver Sheree Tomlinson.

But the trotter certainly wasn’t happy in the days leading up to his win.

Matheson had the eight-year-old in his stall this week after the Northern Southland region was hit with heavy rain.

And Harry H wasn’t happy about it.

“We actually thought about scratching him,” Matheson said.

“He looked flat, but he was just sulking, he wanted to be outside.”

“It had just been so muddy I put them in the stalls for three days.”

“I just had to put him back out in the paddock and yesterday when he came back in we spent hours trying to get the mud off him.”

“He threw a real wobbly, he just had an absolute meltdown.”

“I reckon he was rolling around in the mud just to make fun of us.”

Matheson and Barrie cut their training numbers back to a bare minimum following their accident.

They have built up a little more since then, but the trainers are still operating with a smaller team.

“I can’t have too many at the moment, not until later on.”

“I have got three going to the workouts on Saturday and that’s about it.”

Amabede, who ran a sound fifth behind Harry H is also among the horses Matheson currently has in work.