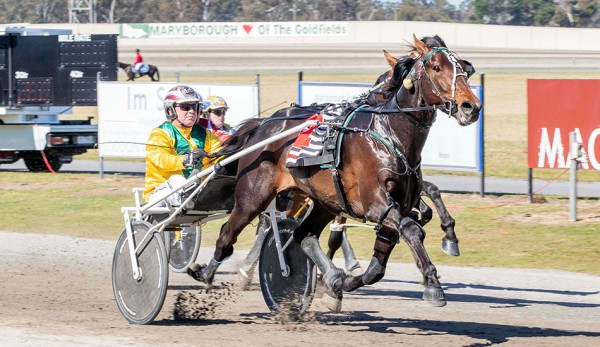 It capped a huge weekend for Butt, who also teamed with another Kiwi, Nathan Purdon, and champion mare Amazing Dream to win the Group 1 Queen of the Pacific at Melton the night before,

Kyvalley Hotspur, a Muscle Hill colt bred by NZ’s Breckon Farms, is hot property having won both the NSW and Victoria Trotters’ Derbys.

He was totally dominant yesterday, taking the lead early from stablemate and main danger Aldebaran Zeus and never looking in danger.

Butt allowed Kyvalley Hotspur to set a solid tempo with a 60.4sec middle half, but still zipped home in 56.5 and 28.4sec for a track record-smashing 1mim59.3sec mile rate over the long 2690m trip.

Aldebaran Zeus stuck to his task for second, giving Lilley the quinella.

“They are two lovely colts … the winner did it so easily in the heat and was fantastic today,” Lilley said.

Recent Kiwi import Mufasa Metro sat three pegs and finished third, 6.3m from the winner, but 11m ahead of the fourth-placed Utopia.

Lilley had more success later in the card when his Victoria Trotters’ Oaks winner Queen Elida easily won the Gold Bracelet with Chris Alford aboard.

In the other Maryborough feature, the Group 1 Redwood Classic for two-year-old trotters, the very exciting Majestic Son gelding Plymouth Chubb continued on his winning way for father and daughter Peter and Kerryn Manning.

Plymouth Chubb broke on debut when eighth, but has since won nine on end, including the Home Grown final, Tatlow Stakes and now the Redwood.

Kerryn Manning drove him like the best horse yesterday, making an early move around the field to sit parked outside main danger Courage Stride and dashing past him straightening for home to win in a 28.2sec last quarter to win by 4.5m over NSW raider Tough Love, with Courage Stride third.

Kiwi raider High On Love made an early move to sit parked, took the one-one on Plymouth Chubb, but was beaten before the home bend and finished 18.7m away in eighth spot.