King Arthur made it back-to-back wins at Addington Raceway on Sunday when taking out the First Direct Taxis Mobile Pace (2600m).

The Auckland Reactor gelding was victorious over 1980m at the Christchurch track last week and Gray was confident of another bold showing.

“I thought he would have been a $2 favourite in that field,” Gray said.

From his outside draw on the frontline, King Arthur was launched off the gate by driver Ross Cameron to take an early lead before handing up to It’s Me. 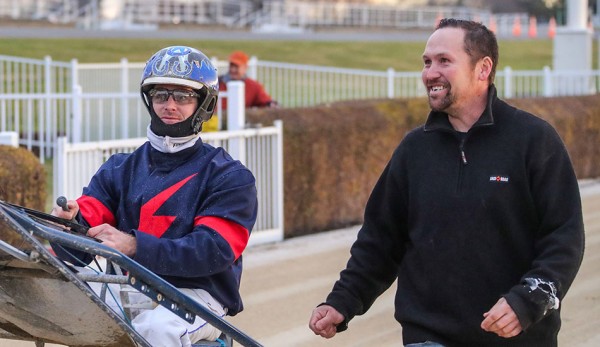 King Arthur enjoyed a soft trip throughout before taking advantage of the passing lane and running away to a 1-1/2 length victory over It’s Me, with a further 2-1/4 lengths back to Maximilian in third.

“He has got great gate speed, so we were always going to press forward and it was just a matter of whether he was going to stay in front or hand up to something,” Gray said.

“Ross has driven him really well all the way through and he made the right decision.”

The seven-year-old gelding has been in impressive form this preparation, winning two and placing in three of his seven starts.

“He has always had plenty of ability but his form tapered off (last preparation) because he had a bad abscess burst out the top of his foot,” Gray said.

“He had about five months away from racing but he has come back a bit stronger and better this time in.

“He has always been really big. He qualified as a two-year-old when Ken Dixon had him. He has just taken a lot of time, but he is finally there, which is good.”

Gray was also pleased by the performance of stablemate Motor Mouth earlier on the card when running third in the Fahey Fence Hire Handicap Pace (2600m).

“Motor Mouth is probably the best horse I have had and running third in the Summer Cup up at Rangiora was a massive highlight for us,” Gray said.

“The whole team had been going really well, which has been great.”