Dexter Dunn has been part of harness racing history in New Jersey.

The 10-time New Zealand driving champion has steered superstar pacer Bulldog Hanover to a new world record at the Meadowlands, recording the fastest mile in the history of the sport.

"He’s just an amazing animal," says Dunn, "It’s just a pleasure to sit behind him. I just sit on my bum and enjoy the ride with him.”

It was the latest of some sensational performances by the son of Shadow Play, after equalling the previous world of 1:46 he shared with Always B Miki and Lather Up.

Tattoo Artist led the field to the first quarter in :26 but already was under pressure from Rockyroad Hanover, who took the lead but held it only briefly as Bulldog Hanover and Dunn made their move. 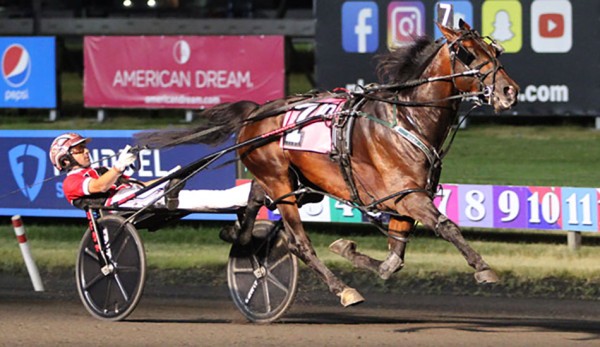 Bulldog Hanover grabbed the top spot in a :53.2 half and remained in front from there. He hit three-quarters in 1:20.6 after fending off a challenge by Whichwaytothebeach, and then held off Rockyroad Hanover to establish the record.

“I had a good helmet all the way around the first turn on a hot first quarter,” said Dunn. “Once (Rockyroad Hanover) crossed over, and the big fella got clear air he was marching on after that.”

For the year, Bulldog Hanover has won seven of eight races and earned more than half a million dollars. He's the third highest-earning horse in North America this year behind the former Kiwi bred and raced Funatthebeach and Beach Glass. Overall he has 21 victories in 29 starts and $1.27 million in purses.

Bulldog highlighted a night for Dunn where he had three winners. His other victories came with Bella Bellini and Slay.

Dunn, the three-time Driver of the Year in North America, has 130 wins in 2022, with stakes earnings approaching $4m.

Amazing Dream was another star performer on the night. She finished second, more than four lengths behind reigning horse of the year Test Of Faith in an open mares race. Test Of Faith won in 1:47, a new world record for four-year-old pacing mares. Shartin is the all-time fastest mare (1:46.8).