Despite the defeat of glamour filly Amore Vita, there was a strong Kiwi influence in two of the major races. 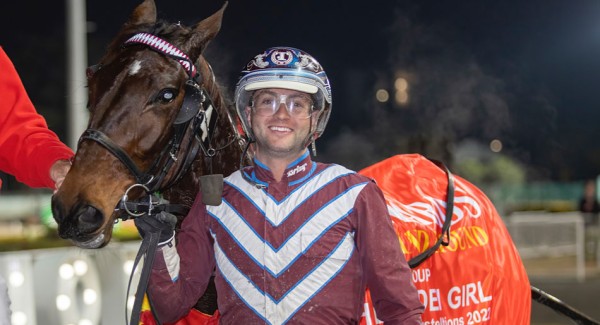 It was only Trainor’s second Group 1 training success, following the Ladyship Mile win at Menangle with Stylish Memphis earlier this year.

“I’ve driven six Group 1 winners, but this is only the second I’ve trained,” Trainor said.

“It was a bit of a roll of the dice bringing her up, but she was fantastic tonight.

“She won her first five starts for me and hadn’t been too far in the better mares’ races at home (Menangle), so I thought she deserved a shot at it.”

The race changed complexion at the start when $1.15 favourite Maajida was crossed at the start and then buried three back on the marker pegs. She never really saw daylight.

Leader Momentslikethese looked to be travelling like a winner on the home bend, but Town Echo stormed home to win by a neck.

Last year’s win Jeradas Delight, who won at $81 last year, was unlucky not to go back-to-back. She had no racing room late and finished third.

Luke McCarthy got the son Sweet Lou in behind the leader Dangerzone and used the sprint lane to win by a neck.

“He’s improving all the time,” Luke McCarthy said. “I wasn’t quite sure if he was up to beating a horse like Leap To Fame just yet, but he got the right run and did it well.

“I’m sure he’ll be better again next week and love the 2600m, so he should be right in the big one (Queensland Derby).”

Adding to the Kiwi flavour was veteran trotter Credit Master’s win in the Group trot for trainer-driver Matty Craven.

Craven specifically set Credit Master for the 1660m race, keeping the eight-year-old first-up since a Melton win on April 2.

“It’s been a long-range plan to bring him to Queensland and this is the first leg run and won,” Craven said. “He’s a quirky big fella and we love having him around the place, but these few trips away have really perked up an old horse like him.”

Credit Master joined Craven’s stable at the start of the year and has only raced six times for three wins and three fourths.

Amore Vita was supposed to be the dominant Kiwi flavour of the night, but endured a tough run from a bad draw and could only manage fifth in the Group 3 South-East Oaks.

Speedy NSW filly Steno led and Jack Callaghan drove to beat Amore Vita, but both ended up being beaten.

Steno, who blazed 28.4 and 26.7sec for the second and third splits, was nabbed late and finished a gallant third, just 1.5m behind local outsider Racy Roxy ($41).

Amore Vita, settled third-last and made a midrace move to sit parked, ran her middle half in 54.6sec and had to tire late. She was beaten 15.2 metres.

“She’s just getting a bit keen in her races. Chris (Alford, driver) said when he started his three-wide run she just wanted to take off and that didn’t help,” trainer Nathan Purdon said.

“It was always going to be hard the way the race was run, but she didn't do herself any favours.”

“We certainly didn’t think she was a $101 chance,” Seymour said. “She’s a lovely filly and made the most of the good run she got tonight.”