Show No Fear’s debut win at Addington Raceway on Wednesday was a special one for trainer Darryn Simpson.

The Oamaru horseman bought the filly as a weanling out of the paddock and guided her to the track where she won at the first time of asking in the More FM 2YO Mobile Trot (1980m).

“She is a nice filly,” Simpson said. “She has only had the one trial on her own, so it was going to be a big ask.

“We thought we would bring her up here as a glorified trial and to get the race off the ground. 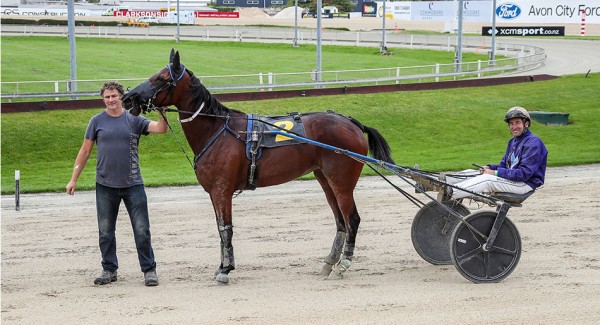 “She is pretty sensible as a rule and she does have a big motor. She has come up really well and I have been really happy with her.

“It is always a worry with trotters in what they are going to do first up. She handled it really well.

“She was made to do a bit down the back but she was too good.”

Show No Fear is a three-quarter sister to Have No Fear who Simpson trained to win on debut as a juvenile before he was sold to Australia where he has won seven races, including the Gr.1 Need For Speed Prince Final (1720m).

Through that connection Simpson was invited to inspect Show No Fear at breeder Michelle Baird’s property.

“We bought Have No Fear at the yearling sales off Michelle Baird. He won his first two-year-old trot up here as well. He was sold to Aussie after that,” Simpson said.

“Before he raced, during sales time, we were asked to go out to have a look at some of Michelle’s broodmares and foals. I liked her, she was my pick, so I ended up purchasing her as a foal.”

Simpson believes his filly has a bright future ahead of her and she could make a return to Addington as soon as next month.

“We will just give her a couple of quiet days and Darrin Williams has told me they are going to have another two-year-old trot on the 13th of April here (Addington). We will have a look at that,” Simpson said.