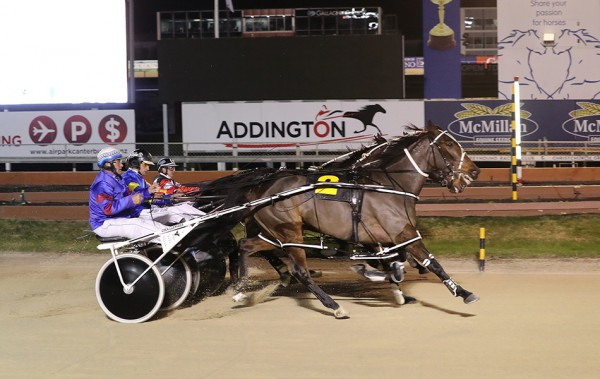 The Colin and Julie DeFilippi-trained gelding secured an early one-one position before storm looped the field to sit parked.

Driver and owner Colin DeFilippi sat patiently midfield before producing is charge wide down the home straight where he showed an impressive turn of foot to mow down the leaders and win by a head over Storm, with a further half neck back to A Delightful Act in third.

While pleased with the run, Julie DeFilippi shared that she did have her concerns about Heza Sport meeting the mobile arm for the first time on racenight.

“I was really rapt with his run,” she said. “We just wondered how he would go from the mobile because he hadn’t had one since September, and that was just in a trial. He hasn’t been near one since, so we didn’t quite know how he would handle that.

“But it was a very pleasing run, it panned out well. Colin was really happy with him.”

His trainers were impressed with the speed he showed late in the run and they are looking forward to the future with him.

“It is quite promising,” DeFilippi said. “I am not saying that he is a great horse, but we think he is a little bit special.”

The DeFilippis will return to Addington Raceway on Sunday where they will line-up just the one runner, Press Play in the Mid-Winter At Addington Pace (2600m).

The five-year-old son of Shadow Play had become a headache for the Broadfield couple, having been accustomed to breaking in his races, but they seem to have got on top of those issues now.

He has finished fourth and third in his last two starts and if he brings his manners once again on Sunday his trainers believe he is capable of breaking maiden ranks.

“Press Play is a work in progress,” DeFilippi said. “His last few starts have been really good, he is doing everything that we have wanted him to do.

“The aim was to get him around without breaking and he has managed to do that in his last two starts. We are pretty happy with that.”