Telfer confident he can beat Krug 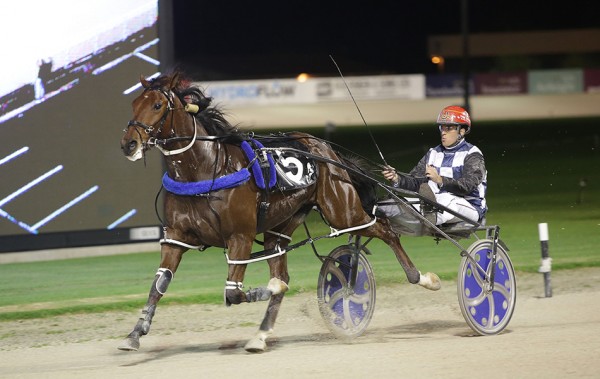 Trainer Steve Telfer knows B D Joe can beat Krug but just how he tries to achieve that in the IRT Harness Jewels next Sunday remains to be seen.

The pair that dominate the market for the IRT 3YO Emerald at the IRT Harness Jewels had contrasting fortunes in their final lead-ups at Alexandra Park on Friday night, B D Joe winning in a lower grade while Krug had to settle for second in the main pace.

The latter race was also won by a Telfer-trained pacer in Dance Time as the Stonewall Stud stables took their tally for the season to 60, already a career best for Telfer and with no end in sight.

Telfer believes that if Dance Time can lead and beat Krug than B D Joe can too and that will be one of the talking points of IRT Harness Jewels week with B D Joe drawn to lead in their mile and Krug on his back.

So the will-he, won’t-he hand up questions will be fired at Telfer.

“But we have options, we also have Alta Wiseguy in the race who is very fast and it will be interesting to see how he goes at the workouts on Saturday.”

While many people think B D Joe will have the option to lead on Sunday week he actually didn’t on Friday night, being allowed to cruise early by driver Ben Butcher before working his way to the lead at the bell and bolting in, breaking 2:40 for the 2200m mobile.

“It was ideal, he has a good solid run but also got the confidence boost of a win,” says Telfer.

“I hate my horses being unlucky in races so maybe he will lead next week, if he can, and if that means Krug is on our back and good enough to beat him so be it.

“But there is no need to make any decisions on possible tactics yet.”

Dance Time’s win, also in the hands of Ben Butcher, earlier in the night was a classic case of a leader getting his way while better horses with group one targets the next week playing cat and mouse back in the field.

Krug went forward early but when the lead wasn’t there he pulled back looking for cover but everybody else did too and soon he went back to last again.

With Dance Time free-rolling in front nobody moved and when they did the leader was going too fast and while Krug rushed home the race was over, especially with the last 400m in 26.4 seconds.

Krug was still impressive, more so than Bad To The Bone, who only battled and confirmed being driven cold isn’t his thing, and Krug still deserves his IRT 3YO Emerald favouritism.

But B D Joe has, after all, beaten him before in the Sires’ Stakes Final and if he leads Telfer thinks he can do it again.

“Krug was very good tonight but Dance Time isn’t probably as good as B D Joe so we might get our chance next Sunday.”

While those IRT Harness Jewels lead-up races were dominated by leaders the feature trot was totally different as Bolt For Brilliance was stunning coming from last to win, breaking his own national 2200m standing start record.

He was playing catch up for much of the race but even coming five wide reminded us all what a great trotter he is to roar past Silver Power.

As stunning as he was trainer-driver Tony Herlihy knows he will need to produce something special to down Muscle Mountain next Sunday after the latter drew the front line whereas Bolt For Brilliance drew the second line.

“We have our work cut out but he was great tonight so he will go a big race, we know that,” said Herlihy.

He wasn’t the only dramatic come from last winner as Folkore won the 43rd North Island Breeders Stakes with a similar run after an inch-perfect drive from trainer Jonny Cox.