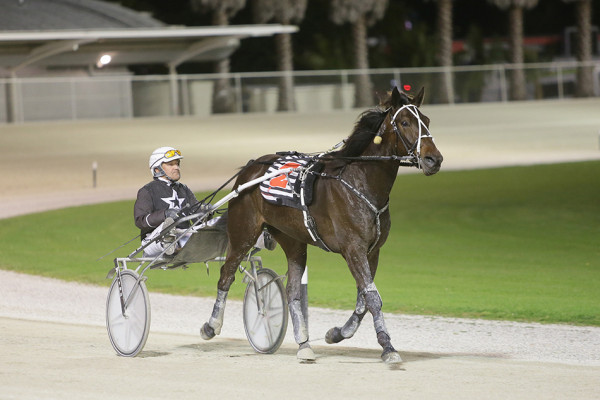 Even The Iceman gets excited talking about Bolt For Brilliance now.

Which is no small feat as Tony Herlihy has driven so many great horses in his record-setting career that it takes a lot these days for him to put his stamp on approval on one.

Bolt For Brilliance gets that stamp.

The four-year-old trotter added the national 2200m mobile record to the standing start record he set two weeks earlier with a dazzling win in the $85,000 PGG Wrightson Sales Series Trot at Alexandra Park on Friday, the race delayed from the autumn.

Bolt For Brilliance played the stalker as first Cracker Hill and then Ultimate Stride led and kept the foot down but when the northern favourite moved up to challenge he didn’t get things all his own way.

When Herlihy, after being patient early, did finally launch Brad Williamson came off the trail to keep him three wide from the 600m, but the favourite never flinched and hit the lead at the top of the straight before holding out the very brave Cracker Hill.

The winner became the first trotter to break 2:40 for 2200m in New Zealand, his 2:39.6 clipping 0.8 of a second off the old mark set by Paramount King in an Inter Dominion heat last November.

“I must admit I never thought I’d see the day they broke 2:40 for trotters here,” said Herlihy.

“And he really did it easily, he almost shut off when he got to the front.

“He has all the attributes of a really good horse and would be right up there with the best young trotters I have driven.

“He has speed and stamina and his manners are really good now, he relaxed beautifully out there three wide tonight.”

Herlihy has mulled over a series of ideas and even thought of the Breeders Crown in Australia, for which Bolt For Brilliance would revert to being a three-year-old.

But with the restrictions around Covid and another good race at Alexandra Park in two weeks he is going to have an easier time next month, with the Cup carnival definitely out.

“He has gone two big 2200m races in a row in very fast times so I think I’ll ease up on him after the Sires’ Stakes and he can look at stepping into open class at the Christmas meeting.”

Further down the track Herlihy will target the Rowe Cup, a race he won with Temporale as a four-year-old four years ago and as good as Temporale is, you already get the feeling Bolt For Brilliance is going to be better.

He has the look of a very, very good horse who is still improving, with gate speed one weapon he will need to add to his arsenal to be the complete package.

But he already looks an outstanding stayer and is he stays sound he could develop into something special.

If he does Herlihy will have only one regret with the $30,000 yearling who was bred by Standardbred Breeders boss Brad Reid.

“It is a real shame one of his owners Stan Mathews isn’t here to see him win these races.

“He passed away about a month ago and was a hell of a good fella so that is the sad part of tonight’s win.”

While beaten Brad Williamson was thrilled with Cracker Hill and says he will be even more competitive with Bolt For Brilliance left-handed at this stage, not that they will be expecting to see each other under those circumstances for a while.