Copy That back in winning form 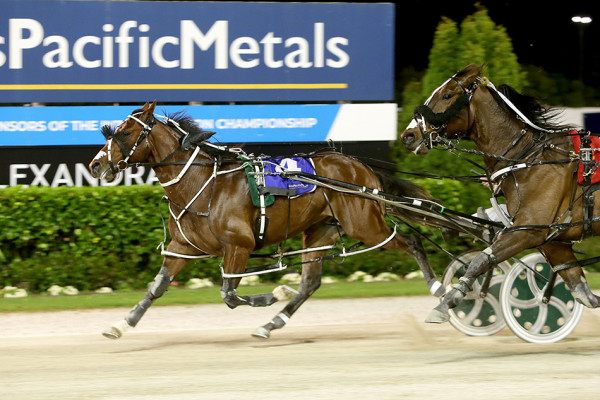 Copy That’s picket fence form line was curtailed last start, but the star northern pacer made his customary return to the winner’s circle at Alexandra Park on Friday night.

The son of American Ideal tackled 2700m for the first time since the his runner-up performance in the Gr.1 Northern Derby and trainer Ray Green was pleased with his efforts when taking out the Kerry Hoggard Memorial – ‘The Holmes DG’ Handicap Pace (2700m).

Starting from the 30m mark, Copy That had to do a fair bit of work mid-race, hopping on the three-wide train behind Star Galleria before being urged forward by driver Maurice McKendry to take the lead off South Coast Arden at the bell.

While Copy That didn’t relinquish his advantage, both South Coast Arden and Mach Shard ate into his lead in the closing stages as the four-year-old tired, but he managed to hold out South Coast Arden to win by a neck.

Green was pleased with his charge’s efforts and said he still has plenty of improvement left in him ahead of the Gr.1 New Zealand Cup (3200m) next month.

“I thought it was a very good run considering it was his first 2700m run since the Derby, which was a while ago,” Green said.

“He is still on the way up in my opinion, he has still got a bit of improvement left in him fitness-wise.

“I thought he was entitled to get tired under those circumstances. It was a good, solid time (3:18.3) and I was pretty happy.

“He didn’t have it handed to him, he had to work and race for the lead. I thought it was excellent, I was more than happy with him.”

Green said Copy That was seen by a veterinarian after his last start runner-up result in the Spring Cup (2200m).

“He had a few minor issues in his previous start, which we have since rectified,” he said. “They were just a few little veterinary issues, just maintenance work that we had to do on him.”

The Holmes DG was Copy That’s final northern run before he flies south later this month to continue his New Zealand Cup preparation.

“There is a flight on October 22 and that will get us in there (Christchurch) four days before the (Ashburton) Flying Stakes,” Green said. “We will throw in a nomination for that and see how we are at the time.

“Nothing is set in stone, but that is what we are looking at.”

Copy That has won five races this preparation and Green said he is taking a fair bit of confidence south.

“I think our form is every bit as good as the form in the South Island,” Greem said. “I am confident that he will race pretty good down there.”