Hanara goes one from one for new bosses

Taitlyn Hanara has been quick to make an impression with her new employers.

The talented Pukekohe-based junior driver only started working for the Michelle Wallis - Bernie Hackett barn at Easter and last night she made her first drive for the stable a winning one when she took out the night's feature trot with Kings Landing, paying $18.20 and $5.00.

"When you watch the horses at home and then they perform like that at the races it's pretty cool and I'm just thankful for the owners and Michelle and Bernie for giving me the opportunity to drive their horse."

Kings Landing was fresh up but Hanara had driven the Muscle Hill eight-year-old in fast work at home and also at the trials before his eighth victory in 51 starts.

Favourites Call Me Trouble and Gaz Man both broke at the start while Kings Landing started well off his 30m mark and aided by a patient drive he got up by three-quarters of a length from Aflying Spur with more than five lengths back to the third-placed Invictus.

"He was travelling the whole way and then found another kick when he needed to." 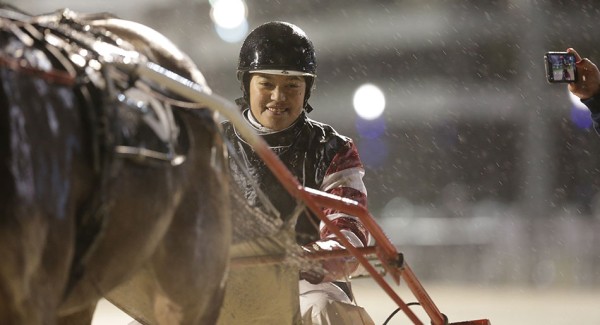 It's Hanara's eighth career victory from 78 starts and she rates it "right up there" with her last victory, which was with Ideal Rule in a heat of the New Zealand Junior Drivers championship at Addington in July 2020.

"That was a big win too - I was pretty excited that day."

The win last night was just her second drive this year after being away on maternity leave. Her son Memphis is now nine months old.

"I'm very lucky to have a Mum (Kiri) who looks after him when I'm working."

In fact Kiri is one of the key reasons why Hanara got into racing in the first place. As she grew up Kiri was working for trainers Dave and Clare McGowan and it was there that the then five-year-old Taitlyn was introduced to Kidz Kartz.

"After that I was hooked."

Hanara also worked for the McGowans for a time as well as for Geoff Small and Tony Herlihy (three years) before her current job with Wallis and Hackett at Waiuku.

It's a case of so far so good.