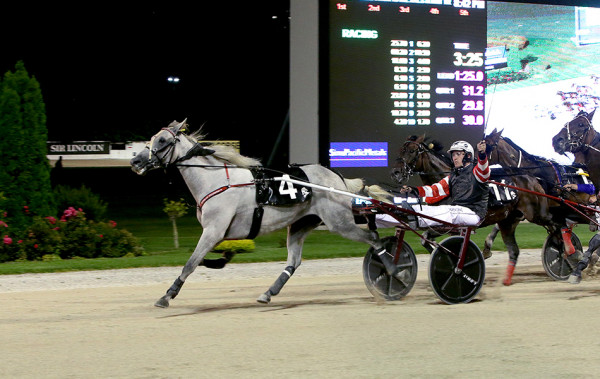 Emma Frost was beaten by the barest of margins in the Gr.3 Waikato Trotting Breeders’ Stakes (2700m) at Cambridge Raceway earlier this month, but she wasn’t to be outdone at Alexandra Park on Friday night.

The Michelle Wallis and Bernie Hackett-trained mare got her revenge when taking out the Auckland equivalent, the Gr.3 Sims Pacific Metals Northern Trotting Stakes (2700m).

The daughter of Monkey Bones sat midfield for the majority of the race and looked flat when turning for home, however, she was able to call on her reserves and secure a 1-3/4 length victory.

Her trainers were pleased with the win, particularly the way she finished off the race.

“I thought she was flat a long way out, but Andrew (Drake, driver) said once he pulled the hood she just really rallied,” Wallis said.

“Josh (Dickie) had them running up front (with The Big Bird) and she was pretty flat, but I think everything was flat and she just rallied the best.

“She deserved it after her runner-up effort at Cambridge (Waikato Breeders).”

Wallis said she was pleased with the five-year-old mare ahead of her Group Three assignment.

“She went fresh into the one at Cambridge, so we thought we would keep her fresh for this one, and it paid off,” she said.

Stablemate Rain Mist And Muscle ran home boldly to secure a quinella for the barn, and Wallis highlighted her 20m as the deciding factor.

“They have gone pretty quick off the front and she was off 20m,” she said. “Her overall time will be better than Emma Frost’s, but she was just chasing the whole way and it didn’t pan out.

“She has still gone super. She has gone every bit as good as Emma.”

While pleased with the result, Wallis said she is unsure of Rain Mist and Muscle’s future.

“Emma Frost will just keep racing in the grades around here,” she said. “It gets tough for Rain Mist and Muscle now because where she is rated she is up in the top echelon up here and she is probably not quite good enough to race against Bolt For Brilliance. I am not sure what we do with her.”

Later on the card, Copy That continued his winning ways at northern headquarters, taking out the Gr.3 Lincoln Farms ‘The Founders Cup’ FFA (2200m) by 1-3/4 lengths over Christianshavtime, with a further 1-3/4 lengths back to Spirit Of St Louis in third.