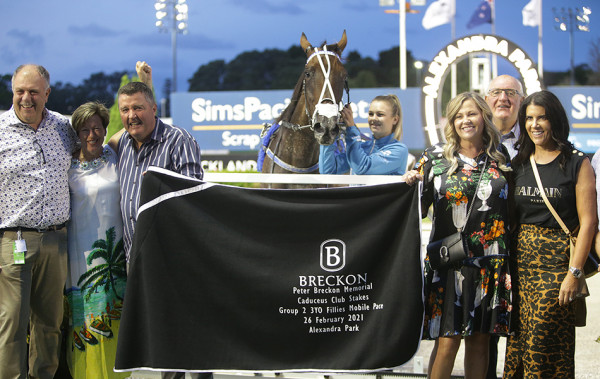 It was an emotional night for Ken Breckon at Alexandra Park on Friday.

Breckon’s fawn colours were carried to victory by dual Group One winner Bettor Twist, with the Hayden Cullen-trained filly running down La Rosa to win by half a head in the hands of Tim Williams.

While every edition of the race for nearly a decade has been sentimental for Breckon, he said finally winning the race makes the occasion even more special.

“It was very sentimental tonight,” he said.

“We are in our eighteenth year (sponsoring the race), so it has been tough. We have tried to win it a few times. Irrespective of win or lose it is still very emotional, but to finally get one across the line, albeit narrowly, is wonderful. It’s a big day.”

Breckon was surrounded by friends and family at Alexandra Park and he said his parents were able to take in the moment on TAB Trackside.

“It’s great to be there with a lot of friends, my wife and family,” he said. “My father was watching it in a retirement village and my mum was watching elsewhere, she had the photo (of Peter) pointing towards the TV.”

Peter Breckon was instrumental in getting his brother involved in harness racing, with Ken Breckon saying the catalyst was an article in the New Zealand Herald in the mid-nineties.

“He (Peter) had always wanted to get into racing and horse ownership,” Breckon said. “He convinced me to go to the sales in 1996.

“There was an article that made the front page of the New Zealand Herald, written by Leo George, who pinpointed who he thought to be the best buy of the sale (Megaera) and if she were to perform on the track she would have residual value, being a filly. That’s what swayed my brother and I was a reluctant buyer, but he convinced me to get into the ownership.

Breckon said that initial purchase was the beginning of a strong friendship with prominent breeder Sandy Yarndley, whose property Breckon later purchased and developed into Breckon Farms.

“That sale kindled a great relationship with Sandy Yarndley, who bred Megaera, and we consequently bought a number of horses off him from the Black Watch family,” Breckon said.

“We later bought the farm off Sandy Yarndley and it has gone from strength-to-strength.

“It has been a roller coaster ride – good times, tough times, good horses, bad horse, and great horses. It looks like we have a great one on the way here (Bettor Twist).”

Breckon was overjoyed with Bettor Twist’s win and he is looking forward to her future on the track.

“Like her Mum (Twist And Twirl), she looks like she is going to be a great stayer,” Breckon said. “She has got a great pedigree, her brother is King Of Swing and he is consequently running tomorrow (Saturday) night in a Group One (Schweppes Sprint Mobile Pace, 1609m) at Menangle. It is pretty exciting stuff.”

Friday’s win continues an exciting month for Breckon and his Waikato breeding operation, with Breckon Farms securing the title of top consignor by aggregate at New Zealand Bloodstock Standardbred’s Karaka Yearling Sale session a fortnight ago, selling more than $1.8 million in bloodstock.

“We probably learnt a lesson, we went to a new stallion over here. Kiwi trainers aren’t in favour of new stallions, they would rather wait and sit on the fence, whereas American buyers will have a real crack at them.

“This year we had a better pedigree. My wife and I decided to lift the lid off the jewelry box, letting all of our top pedigrees go. We got great results and we are excited by that. You have got to get your top pedigrees out there in the marketplace.

“The horses are doing the job. Tomorrow night we have three horses in Group One races over in Australia – King Of Swing, Tailored Elegance, who is in one of our syndicates, and a very good horse called Kyvalley Hotspur.

“It is great to see the farm winning on both sides of the pitch. Nigel Fahey (Farm Manager) and the team on the farm are doing a great job, and it’s great having good broodmares doing the job.”

Dexter Dunn’s starred at the Meadowlands, with his fourth haul of seven race wins on the one night.

It’s not just his 16 wins that makes Pay Me Visa an exceptional horse.