Ferguson shines on night when hot favourites get beaten 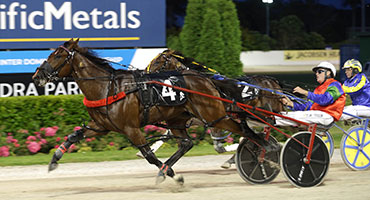 Dylan Ferguson had an Alexandra Park first on Friday night and it is one he hopes he can repeat in even more lucrative fashion in a month.

Ferguson piloted Classy Operator to a surprise win in the boys Young Guns heat at Alexandra Park and deserves much of the training credit as he does the harness training at Graeme Rogerson’s Hamilton dual-code property.

The talented young horseman says it was something special to win a $20,000 two-year-old pacing race at Alexandra Park, the first time he has done that with one of Rogerson’s horses.

“It is very hard to win these types of races cause so often they are dominated by stables like the All Stars, Lincoln Farms or Barry Purdon.

“So for Graeme to have gone to the sales and bought this horse and have him here less than a year later winning like that is a huge thrill.”

Of course Classy Operator could provide Rogerson and Ferguson with an even bigger thrill in the $100,000 Final of the series which will be part of Alexandra Park’s new mega meeting on March 5, which now combines six group races including both two-year-old finals and the Oaks and Derby on the same night.

“We know we are in the final now and we can train him and peak him for that,” says Dylan.

“He already improved a lot between his first two runs as you would expect and he is a typical Bettors Delight like that.

“I am sure Graeme will be back buying at the sales next week but to be honest I have been so busy I haven’t looked at many yearlings yet.”

Classy Operator was one of four Rogerson purchased at Karaka last season and now finds himself with a shot to repay his $70,000 purchase price inside almost a year.

He was purchased off Woodlands who offer a Sweet Lou half sister as Lot 60 at Karaka on Sunday week.

He does so in an even crop of juveniles so far without a pecking order but one who really caught the eye behind him was Mr Ibiza, who rushed home for second for co-trainer and driver Logan Hollis.

He and training partner Shane Robertson went one better in the night’s main pace when Christianshavtime exploded home along the passing lane to down hot favourite Krug.

While Krug will clearly improve with the run after having a post-race blow there is no denying Christianshavtime is an open class horse in the making, probably sooner than his trainers would like.

“He might have to take on a Copy That in the next month to get ready for his main aims the Taylor Mile, Messenger and then the Jewels,” says Hollis.

Krug’s defeat continued a somewhat frustrating night for favourite punters as Bolt For Brilliance was run off his feet early and had to settle for second to the speedy Invictus in the main trot.

Both Bolt For Brilliance (40m) and Temporale (50m) were slowish from their big handicaps as Invictus raced to the front and never looked back, with the favourite only catching the field at the 1200m and going enormous to finish second.

But while he had a 30m head start Invictus again proved again what a classy sprinter he is, with four of his seven career wins for trainers Michelle Wallis and Bernie Hackett coming over the 2200m.

After settling for seconds with both Krug and Bolt For Brilliance trainer-driver Tony Herlihy was able to double up in the last two races winning the fillies Young Guns heat with American Beauty and the maiden trot with Bohemian Rhapsody.

American Beauty is owned by Herlihy’s wife Suzanne and their close friends Ross Johnson and Janene Cole and beat a very brave Artisan in the fillies heat.