Mataderos took a massive step towards competing in the kind of races his superstar mum did on a big Friday night at Addington for trainers Robert and Jenna Dunn.

The son of Dream Vacation and champion racemare La Coocaracha powered to a huge fresh up victory from a 35m handicap on the same night the Dunns produced their open class veteran Classie Brigade for his second win in the Group 3 Maurice Holmes Vase.

Both horses were expertly handled by John Dunn who also drove Somekindawonderful and Majestic Jag to win to bag a winning quartet for his family’s stable.

With another win of Slip The Hundy, the reinsman finished his first night of driving following the national level four lockdown with an impressive five-win haul.

Bred to be good but no hardly a racetrack star in his homeland of Australia, Mataderos made giants strides last preparation winning six of nine starts after joining the Dunn stable.

That progress was made on big grass tracks as the Dunns worked on getting the best out of the five-year-old.

Taking his game under lights and on the grit at Addington on Friday night was a big step forward for the promising trotter.

“The only time he had been to Addington he was very wound up in the stable and we were worried he would be the same,” Robert Dunn said.

“We mainly kept him to the big grass tracks last season because he is a big, nervous horse.”

“But tonight it was a big step in the right direction.”

“He is a pretty serious trotter in the making, he is a great staying horse and he has got speed.” 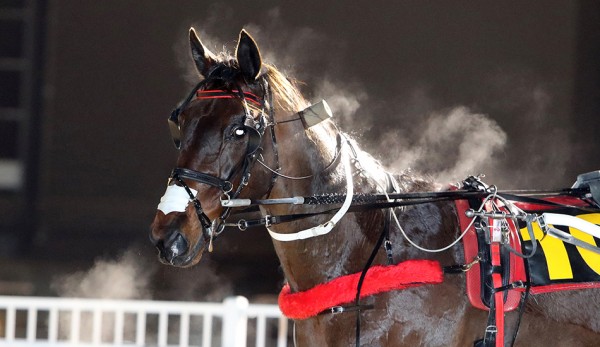 It was something like Groundhog day when the Dunn team produced Classie Brigade for his fresh up win in the Maurice Holmes Vase.

Each spring the pacer fronts up and starts the open class season in style to put himself in New Zealand Cup contention.

“He is just a great old horse with great manners,” Dunn said.

“He reminds me a lot of a horse called Palestine, who Terry May trained.”

“When I was a young fella he won all the early races before the (New Zealand) Cup for about three seasons.”

Though it may have appeared business as usual for Classie Brigade the recent lockdown meant a big change to his training routine.

“He is a beach trained horse, he needs the beach but he had to be trained on the track during lockdown.”

“It’s not ideal for him and there should be plenty of improvement there with him getting back on the beach.”

The six-year-old ran home powerfully from the rear for third on a 56.2sec last 800 and 27.6sec last 400m which left him with little winning chance despite his brilliance.

“He went great and he will take a lot of improvement out of that run.”

The race was won by Vacation Hill who clocked those sizzling sectionals with a sharp sprint along the passing lane.