Kentuckiana Lodge trainers Cran and Chrissie Dalgety are happy to admit they don’t deserve all of the praise for Sugar Me’s outstanding recent run of success.

The four-year-old reeled off sizzling closing sectionals to clinch his fifth win in just his eighth start at Addington last night to effectively propel himself to the verge of open class.

It's been well documented that Sugar Me looked nothing like a horse that could get to free-for-all grade in just ten starts when he was being broken in.

Cran was reserved in his summation of the horse’s behaviour which bore close resemblance to that of a raving lunatic.

“Put it this way, everything we wanted him to do, he wanted to do the opposite.”

“He certainly had no interest in being a racehorse early on.”

The Kentuckiana Lodge team were tested by Sugar Me’s attitude but they weren’t put off.

Eventually, Cran came up with a plan to call on an astute horseman further south and that decision has proven to be a masterstroke.

“I gave Graeme Mee a call and asked if he would take him on.”

“Graeme has been training and riding horses longer than most of us have been on this planet.”

“He is a very accomplished all-around horseman and I was very lucky to be able to call on him.”

“He and his wife Ann have come in on a few of our horses and it’s been great having them on board."

“Graeme had Sugar Me for three months and the job he did with the horse was absolutely incredible.”

“To say the horse returned with an attitude adjustment is an understatement, we couldn’t be more grateful.” 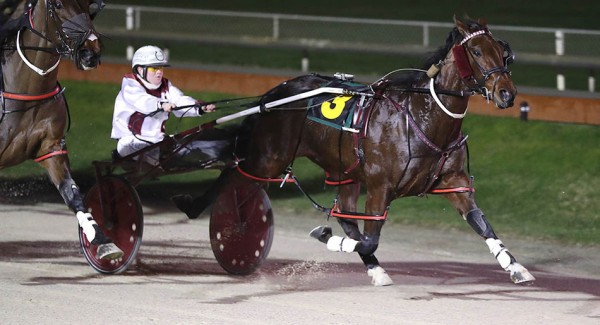 Though Sugar Me is back in Cran and Chrissie’s care they still want to pass on much of the credit for the pacer’s brilliant form.

“Sarah (O’Reilly) has done a lot of work with him, he is her best mate.”

“She has ridden him in the afternoons (before lockdown) and given him a lot of one on one attention."

“We are happy to give plenty of credit to our Rakaia stable forewoman.”

Cran was also quick to acknowledge American owner Larry Karr for his patience with Sugar Me.

“I haven’t asked Larry whether they had this much trouble with Sweet Lou, but I’m picking they didn’t.”

“I have had a lot of Sweet Lous and they have done a great job for us.”

“We sourced this bloke from the yearling sales and he wasn’t cheap.”

“Not racing until he was a late three-year-old wasn’t the plan, but Larry was patient right the way through.”

“It's a pleasure to see him doing well for such a great owner more than anything, we have struck up a great relationship and there are plenty more wins to come.”

“It looks like we are going to have a lot of fun with this horse down here and Larry will have even more fun with him when he gets him to America one day.”

With Sugar Me rushing through the grades so quickly, Cran is yet to cement his spring plans.

But it is basically a matter of when the horse takes on junior free-for-all grade next.

“We have plenty of options in front of us, that’s the best thing.”

“We will regroup, freshen him up and work on a plan of attack."

Kentuckiana Lodge has one more runner this weekend in Shards Of Manhattan in race 8 at Addington on Sunday.

Carter Dalgety will put his unbeaten record in the sulky on the line with the filly.

He’s one-for-one after winning his career debut at Oamaru before lockdown.