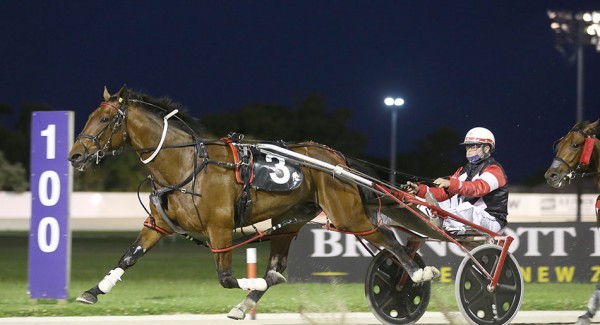 It’s been a little bit lonely at Diamond Racing’s Auckland barn over the last few months.

When the Delta variant of COVID-19 entered the city of sails, senior trainer Robert Dunn decided to send his entire northern team south to their Woodend Beach base.

“Once we realised COVID had snuck in, we made the call to send them all down south,” said Dunn, who trains in partnership with his daughter-in-law Jenna.

While it has been a quiet few months for Dunn, he has been starting to welcome back a few of his team over the last few weeks, two of whom scored a double for the barn at Alexandra Park on Friday night.

Some Chevron opened the stable’s account in the Magness Benrow Mobile Pace (2200m), while a race later Dance Till Dawn secured the double when winning the Caduceus Club Fillies & Mares Mobile Pace(1700m).

“We were really pleased with Some Chevron because he needs a little bit of confidence,” Dunn said.

“Once he found the lead he just dropped the bit and Mango (Brent Mangos, driver) said he was perfect.

“I was really rapt with Dance Till Dawn’s run because she only travelled up on Saturday. The trip sometimes can knock them a wee bit, so we didn’t do a lot with her.

“She was really lazy when she found the front and he (Mangos) only pulled the plugs with 200m to go, but he said the strongest part of it was the last 100m and she felt really strong.”

The pair of juveniles will soon be joined by fellow two-year-old Allegra who scored a southern result for the barn on Friday when comfortable winning the Dunstan Horsefeeds Sires’ Stakes Filles (Heat3) Mobile Pace (1980m) at Addington Raceway.

“She was very impressive,” Dunn said.

“Her forte is her power, she is a very powerful horse. She is a big filly with a lot of upside to her.

“Tonight Johnny (Dunn, driver) pushed the go button, we added a pair of pull-down blinds on her and she was awesome.

“She is coming up north now. We hope to have three fillies qualified for the Sires Stakes Final.

“Dance Till Dawn will be in next week’s heat and she will be joined by First Rose, who is already up here, and she has only had the one start for the one win.

“She is going to the trials at Pukekohe on Saturday and hopefully they both qualify and join Allegra in the final.”