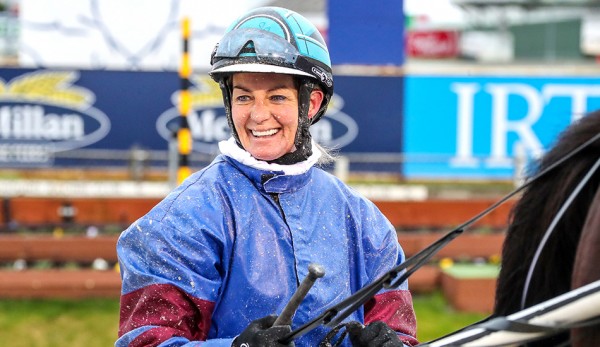 Jo Herbert made a return to the driving ranks last season after nearly a decade away from the track and on Sunday at Addington Raceway she was able to fulfill her biggest ambition on her return – 200 driving wins.

It was fitting that the milestone was brought up behind Taumata VC in the Woodlands Stud Supports Canty Breeders Mobile Pace (1980m) as the four-year-old mare was the primary reason for Herbert’s return to driving.

“It is pretty special to win it on that horse,” Herbert said. “My Uncle (Doug Herbert) bred her and he is the reason why I made the comeback because he wanted me to drive her when she raced.

“It has been a long process with her, but it just made it a bit more special today.”

Herbert was also pleased to get the win in the colours of her employers, Colin and Julie Defilipi.

A pioneer for female drivers in New Zealand, Herbert won 193 races in the cart before she was forced to step away from the game more than a decade ago to look after her son Brooklyn.

“At the time it was in the too hard basket, he wasn’t that well,” Herbert said. “It got too hard, so I just focused on him.”

Herbert wasn’t aware that she was so close to 200 wins when she walked away from the sport, and it became one of her major goals upon her return.

“At the time when I stopped I hadn’t actually looked at that (career win tally),” Herbert said.

“It was more that I had to do it (give up driving) because of my son. If I had known back then that I was that close I wouldn’t have given it up quite so soon.”

But a decade on she has fulfilled her ambition of reaching 200 wins.

“It’s been a long time coming, but I am glad to have got there,” she said.

Herbert has been fortunate to drive some quality horses over the years and she said it is hard to single out any one in particular, but highlighted the Paul Kerr-trained Chloe Hanover as one of her favourite’s.

“I have driven some nice horses and every win has been special,” she said.

“But winning 11 races on Chloe Hanover was pretty special.”

Herbert said the thrill of driving in several New Zealand Cups has also been a highlight.

“I have driven in the New Zealand Cup three times, my closest was fourth, but it is still pretty special to drive in that race,” she said.

While she is driving less frequently these days, that is exactly how Herbert wants it, citing she has done her time travelling to drive at various meetings.

“I am actually quite happy,” she said. “A lot of the time I don’t like travelling, I have done all of that. If it is handy I will go, but I don’t really go out of my way to get drives.

“I am quite happy just to take a back step.”