The four-year-old won three of his four Albion Park runs for Ray Green and connections decided he was best suited to staying there with trainer Mark Dux.

After a good third at his first run for Dux, Tommy Lincoln stepped outside of his comfort zone to sit parked and win in terrific style at Albion Park last night.

Despite doing all the work, he crushed the favourite and leader, Saucy Dreams, and went on to win by 2.8m in a slick 1min53.2sec mile rate for 1660m.

Another exciting four-year-old to impress on the night was Rickie Alchin’s Crunch Time.

Always renowned for his blistering speed, Crunch Time is developing strength and versatility to go with it.

The way he kept burning around the field the back row to find the front after 400m and then roar away to win by 25m in a 1min51.4sec mile rate for 1660m was pretty special.

The time was just a second outside the track record held jointly by Im Themightyquinn and Cruz.

High-class veteran Alta Orlando posted his 21st career win when he upset local hero Colt Thirty One in the free-for-all.

Ricky Thurlow took Alta Orlando to the lead, that handed to Colt Thirty One before beating him along the sprint lane despite the leader running a 26.7sec closing split. 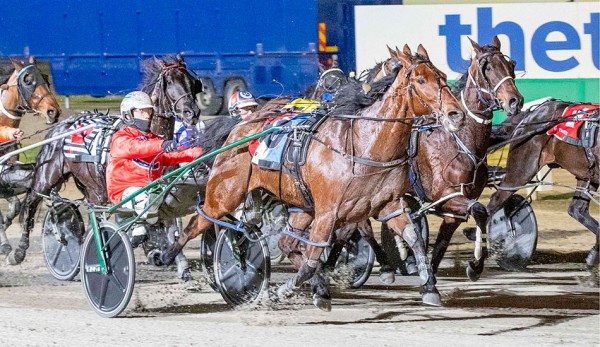 Three runs this campaign have netted a ripper first-up second and two wins, the latest at Melton last night in the Our Maestro free-for-all.

Greg Sugars drove a gem of a race to land the one-one trail behind favourite and main danger, Western Sonador, and overpowered his rivals late in a very slick 1min54.7sec mile rate for 2240m.

Western Sonador was from disgraced in a close-up fourth after doing all the work and being tightened for room late.

Triple Eight has won three of his eight starts since being transferred from Team Telfer to Jess Tubbs and Greg Sugars earlier this year.

Sure it’s been an awful few weeks with setbacks to stars like Shockwave, Lavra Joe and To Fast To Serious, but thankfully the young brigade may come to the rescue.

Minstrel was first out when he stepped-in to free-for-all for the first time, used he pole to lead and effortlessly made it five wins from as many starts this campaign.

Just two races later, Magnificent Storm, who finished second to Minstrel in the Golden Nugget back in January, posted his 14th win from just 16 starts for trainer Ray Williams and driver Aldo Cortopassi.

It was some sort of win, too.

Magnificent Storm came off a 40m backmark in the 3309m Marathon Handicap, added to that handicap with a tardy start, copped a couple of checks at different stages, but still scored by 1.7m win a 2min0.9sec mile rate.

It won’t be long before they lock horns again and take WA’s free-for-all racing to an exciting new level.

Minstrel’s win further underlined why Team Bond is keen to get him across for the Victoria Cup in October at Melton.

The other highlight of the Gloucester Park card was Alta Engen’s dominant, front-running win in the $50,000 Group 2 San Simeon (2130m).

He’s yet another exciting WA four-year-old and gave nothing else a chance for trainer-driver Aiden De Campo.

The Darren Weeks-trained daughter of Hurrikane Kingcole cruised to victory against the boys in her heat of the Australian Gold Brisbane Graduate series at Albion Park last Friday.

Cat King Cole has won six of her eight starts and gets the advantage of a preferential draw in this series because she takes on the boys.

That means she’s drawn the pole for next Saturday night’s $100,000 Group 1 final at Albion Park, while the other impressive heat winner I Am Sparta looks the main danger from inside the back row (gate eight).

What a season young gun NSW driver Cameron Hart is having.

Just when it seemed the emerging Burnham Boy was going to win after sitting parked, Hart got Rocknroll Angel clear of a pocket and she somehow exploded home in a 26.5sec last quarter to win by a head in a 1min52.5sec mile.