David Butcher each way all day at Hawera 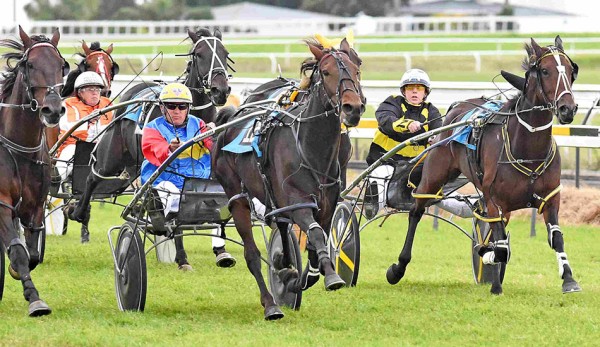 He knows he's got "a good book of drives" but David Butcher's been around long enough to not take anything for granted at today's grass track meeting at Hawera.

The winner of 2519 races in New Zealand - making him the fourth highest behind Tony Herlihy (3610), Maurice McKendry (3336) and Ricky May (3016) - Butcher has drives in all seven races and many will be well supported. He also trains three of his best chances.

"Sometimes you have a nice book and you go home with nothing," he says.

He rates Caulfield as his best of the day in race 2, the Tommo's Tyres Mobile Pace - 2000m. The Sir Lincoln three-year-old has had a second, a third and a fourth from his only starts.

"It's not an overly strong field and last time he was at Hawera he just got rolled the last hundy."

That was on February 4 in finishing second to Letsgodancing. The second day of the meeting (Sunday, February 6) was abandoned after torrential rain swept through Taranaki.

Butcher reckons more than a fortnight on the track will be fine.

Claudia Schiffer has drawn one for the Woodlands Stud Taranaki Breeders Stakes and Alcippe's Delight has joined come north after being trained by Steven McRae in Canterbury.

The rival Butcher is most wary of is Sean McCaffrey's Toodaloolou who is drawn directly behind him on the second row.

"It's a reasonably strong field with 3 or 4 good chances."

"The set-up here is a bit easier, rather than racing 14 or 15 down south and she is a handy maiden and knocking on the door.

That goes for a number of Butcher's chances today.

As always he's looking forward to going head to head with son Zachary. They line up against each other in four races, including the Revital Fertiliser Taranaki Cup (R4 3.00pm) where Butcher senior will drive El Dorado, and Zachary southern visitor Pay Me Visa.

"I've enjoyed watching them (his sons Zachary and Benjamin) but beating them is better."

David Butcher's full list of drives for the day are : Race 1 Maria Theresa - "not too far away in recent starts"
: Race 2 Caulfield - "best of the day"
: Race 3 Alcippe's Delight - "knocking on door"
: Race 4 El Dorado - "going alright, has to be handy"
: Race 5 Claudia Schiffer - "chance in strong field"
: Race 6 Full Of Hope - "does everything right and is easy to drive"
: Race 7 Big Skewy - "due a win but lacks early speed"