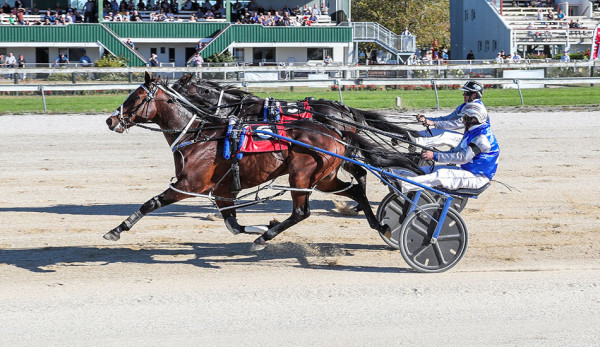 Multiple Group One winner Self Assured ended his season on a high with a hard fought victory in the Group Three Rangiora Classic (2600m) on Sunday.

The Hayden Cullen-trained five-year-old found an early position in the one-one behind stablemate Spankem, before the pair pushed forward and driver Jonny Cox secured the lead with 1800m to go.

Self Assured was left untouched up front until driver Tim Williams extricated Spankem out of the trail to apply pressure on his stablemate turning for home. Spankem steadily eked into Self Assured’s lead, but the latter was able to hold on to record a head victory, with a further five lengths back to Cranbourne in third. 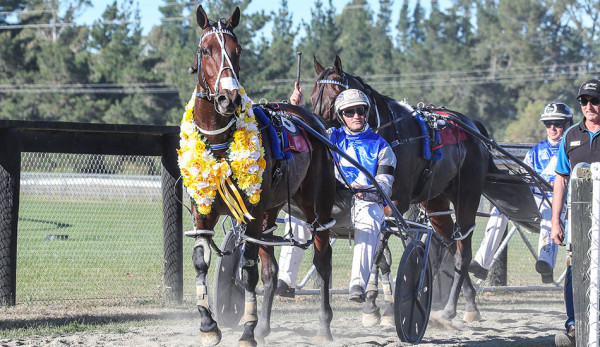 Cullen was pleased with the efforts of both of his runners and said Spankem showed a lot of heart down the home straight.

“They are both very nice horses,” he said.

“Spankem tried his absolute heart out but just fell short once again. You can’t take anything away from the other guy (Self Assured), he is a very good horse.

“I think if it was a 2000m race it might have been a different story, but over that distance Self Assured just loves it and he is very hard to get past.”

His victory on Sunday brings the curtain down on what can only be described as a stellar season for Self Assured.

The son of Bettor’s Delight won six of his 12 starts this term, highlighted by his win in the Gr.1 New Zealand Trotting Cup (3200m) last November.

He came into Cullen’s care in January and placed in his first three starts before winning his next three on-end, including the Gr.1 Easter Cup (3200m) earlier this month.

While Self Assured is heading for a well-deserved break, Cullen is looking at pressing on with Spankem, with Australia a possible option now the two-way travel bubble has opened up across the Tasman.

“Self Assured will go out for a break and will get ready for spring racing,” Cullen said.

“I’m not 100 percent sure with Spankem yet. We might have the Queensland carnival on the cards, but we are just playing it by ear at the moment. Over the next few weeks we will make plans on where we are going to go with him.”

Spankem will likely be Cullen’s only runner heading across the Tasman, but he said he could be joined by Amazing Dream after the Harness Jewels in June.

“Amazing Dream is racing here until the Jewels and then the owners are pretty keen to take her over there as well, but it won’t be under my name,” Cullen said. 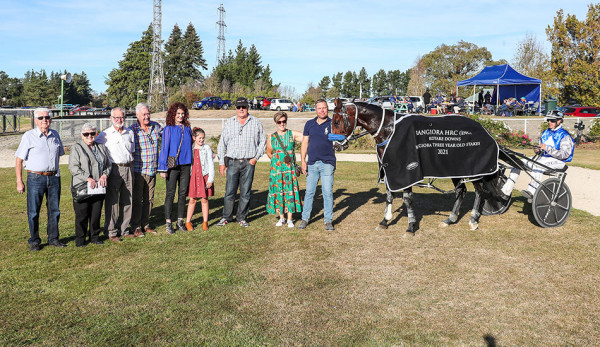 Meanwhile, Cullen celebrated a treble at Rangiora on Sunday after also recording victories with Franco Indie and Pace N Pride.

Franco Indie won the Canterbury Print Services Mobile Pace (2000m) by two lengths. It was the two-year-old gelding’s first raceday run and Cullen said he will now head to the spelling paddock to strengthen for his three-year-old season.

“Franco Indie is a lovely horse,” Cullen said. “He is going to go out for a break now, he has done a great job. He is a big horse and he is still quite weak. I think a three-year-old is his future.

“He will go out now and hopefully get ready for the Sires’ Stakes in November.”

Cullen was also pleased with the winning efforts of Pace N Pride in the Kotare Downs Rangiora 3YO Stakes (2000m) after his unplaced run in the Gr.1 New Zealand Pacing Derby (2600m) a week prior.

“Pace N Pride didn’t get much of a run in the Derby,” Cullen said. “He did look the class horse in the field (on Sunday).

“He is a nice horse and he will keep ticking away until the Jewels, that’s about all there is for him.”