With the harness racing season only having just begun it would be easy to think the winners of the first juvenile features of the season could be flash in the pain speedsters.

But that won’t be the case with Forever Me and Merlin, very different winners of the two Young Guns Finals at Alexandra Park on Friday night.

Both led for most of their 1700m group two finals but their tactics were polar opposites, John Dunn turning the filly’s race into a staying contest while Zachary Butcher won the early battle in the boy’s race and took the tempo out of the contest, leaving him with enough energy to hold out Beckham. 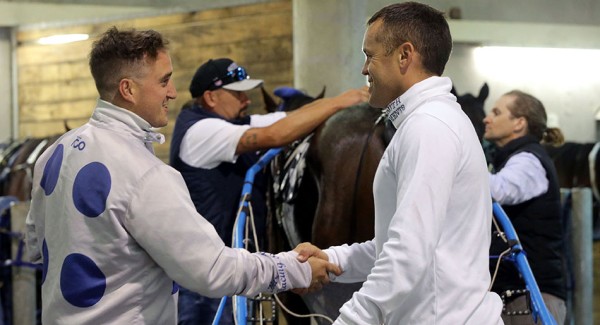 The win continued the great run for trainers Barry Purdon, more recently with Scott Phelan, in the Cardigan Bay Stakes but Merlin is an extreme rarity, a juvenile winner of his first four races less than three months into the season.

“I have said it before and it is true, he will be far better following a solid speed but at the moment he is so fast it is hard to find a horse to trail.

“That is why I think he will go on with the job later in the two-year-old season because that speed will take you a long way and he has great trainers to keep him improving.”

Beckham was brave in second while Seve paced roughly for a stride in the home straight and looks ready for his break but has also had a wonderful first campaign.

Forever Me’s victory was far more belligerent as she reached the lead in the straight the first time and with catch driver Dunn given the license by trainer Steve Telfer to let the beautifully-bred filly roll, that is exactly what he did.

She looked every inch her mother’s (Adore Me) daughter as she kept going and while stablemate Kahlua Flybye chased gamely the winner was too good.

“She is from a great staying mare and we wanted to drive her for strength tonight,” said Telfer.

“It is a shame Ben (Butcher) couldn’t partner her tonight but he had been under the weather and John did a great job.”

Being so richly-bred Forever Me is already now worth a fortune as a broodmare but with the family being one that improves with him her connections, which include Haunui Farm’s Mark and Sara Chitty and TAB deputy chair Anna Stove, may have a seriously good filly on their hands for a few seasons.