The All Stars’ exceptional three-year-olds had two goal destinations at Alexandra Park on Friday night.

The first was the winner’s circle after the group ones of the $250,000 Woodlands Northern Derby and the $150,000 Pascoes Northern Oaks.

The second dream destination was the spelling paddock, which is where Akuta and True Fantasy will head now.

Both three-year-olds were outstanding winning their respective classics, Akuta having to break 3:20 for the 2700m mobile on a windy night and grind his way past trailer Bollinger and gutsy leader Beach Ball.

There is little doubt Akuta is the best of this crop, the bulk of who will likely head for a spell and come back for the second half of this season but they have also had some brutal racing and most look in need of a break.

“I am looking forward to getting him to the paddock,” said trainer-driver Mark Purdon.

“He has done a wonderful job and is a high-class horse but a break will help him because he has rarely had an easy run his entire campaign.

“I am also glad we elected to miss The Race with him, Ian (Dobson, co-owner) was really good about that.”

Bollinger has been the big mover of the summer and Purdon suggests he is one horse who could race on over the winter and head to the Queensland carnival.

Beach Ball has gained plenty of admirers in the north and if he can keep improving and stay healthy and happy he is going to be a fun horse to have around the better races. 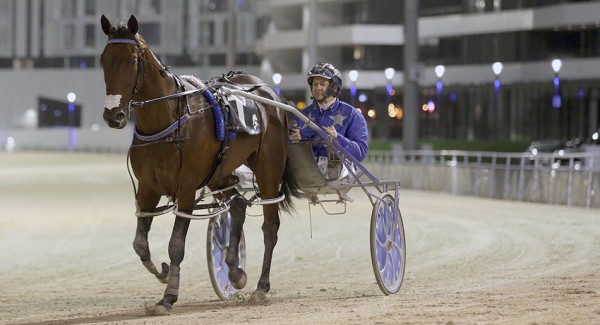 While Akuta was only backing up what he did in his prelude last week by winning the Derby, True Fantasy really tested Purdon and partner Hayden Cullen’s skills to triumph in the Oaks.

The stable was very open about her dust bowl battles of previous weeks that left her with respiratory issues, ones that only scoped clear last Tuesday.

She was used early twice before trailing Dance Till Dawn in the Oaks but still just had enough left to hold out Lady Of The Light, whose gutsy second meant her driver Maurice McKendry finished second to Purdon in both Group Ones.

“It has been a tricky few weeks for her,” said Purdon of the filly who finished unplaced for the first time in her career at her previous start.

“The respiratory thing didn’t seem to affect her work but it would have affected her racing and missing the prelude last week means she can’t have been at her peak.

“So to win this tonight was a big effort and she is ready for the paddock and she is so brave she will be a force in the second half of the season for sure.”

Cover Girl ran on well for third in what could be her last start in New Zealand, with trainer Bob Butt confirming she has been sold to clients of Belinda and Luke McCarthy in Sydney, with Tim Vince to remain in the ownership.