Christianshavtime makes it five wins for the season

Trainer Logan Hollis knows Christianshavtime needs a new weapon to have a realistic chance of snaring a Group One this season.

He just isn’t sure how he and training partner Shane Robertson are going to help him find it.

The four-year-old showed five weeks between runs had done him no harm when he came from last to win the feature pace at Alexandra Park on Friday, clocking a super slick 1:55.4 mile rate for the 2200m mobile.

It was his sixth career win and fifth this season as he continues to shape as one of the more promising pacers emerging in the north.

His next three races will see him have to step up to the next level though, with group ones in the Taylor Mile, Messenger and the Jewels and in at least two of those gate speed could be crucial.

Which is a shame because Christianshavtime doesn’t have any. Yet.

“He got out of the gate better this week, actually quite good for him,” says Hollis.

“But he doesn’t have that really high gate sped he might need in this grade yet.

“We know that would come in handy but he just isn’t that sort of horse yet. But both Maurice and Tony have told us they think it will come with time.” Beating the likes of Copy That and Amazing Dream in the Taylor Mile without gate speed might be beyond Christianshavtime this autumn but by Christmas it wouldn’t surprise to see him competitive in an Auckland Cup, so steep has been his improvement curve.

Herlihy, who was at Addington on Friday night, will be back in the sulky for the group ones coming up, with McKendry sliding back behind Copy That.

But McKendry would have been smiling early in the 2200m mobile on Friday night as the leaders went super hard early, perfectly setting the race up for Christianshavetime to outswoop Havtime and the brave Kango, who led during the early burn.

It was the 12th win of the season for the Pukekohe trainers and Hollis admits that number could be higher but for the sale of Luke John and Mr Ibiza.

“But we have no complaints, we have had a great season both with our horses and at the sales.”

Hollis and Robertson haven’t been scared to trust their eye, which is obviously very good, as the sales again and are syndicating two horses from the recent yearling sales.

“We don’t spend big money and have a couple we really like, we still have shares in an Art Major we got for just $27,000 so we have room for owners and horses.” 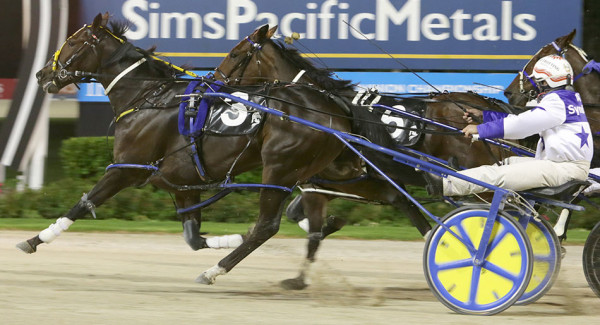