Blacks A Fake – where is he now? 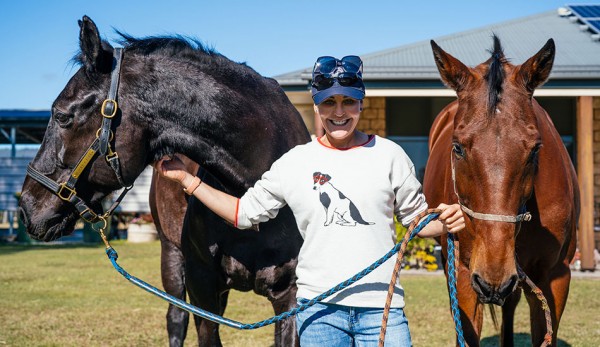 As King of Swing attempts to do a “Blacks A Fake” on Saturday at Albion Park, the champion himself is enjoying retirement in rural Queensland.

If the defending champion King Of Swing wins the $250,000 2021 TAB Blacks A Fake Queensland Championship again on Saturday night he’ll emulate the double achieved by “Blackie” in 2006 and 2007.

Back then the race was known as the Winter Cup. After Blacks A Fake won again in 2009 the race was re-named in his honour.

On Saturday there will be six Group Ones, with the Blacks A Fake the most prestigious of them all.

The highest stake-earning pacer in the world at the time, Blacks A Fake was retired after finishing second in the race a decade ago.

At the time trainer-driver Natalie Rasmussen said “I’ve always said I wouldn’t keep him when he’d lost his greatness and now the time is right.”

Rasmussen, who subsequently moved to New Zealand and formed the all-conquering All Stars stable with Mark Purdon, drove him in all but three of his 105 starts. He won a remarkable 72 races, and was placed a further 24 times, amassing over $4.5m.

The only horse to ever qualify for six Inter-Dominion finals (beating Caduceus’ record) he won an unprecedented four of them between 2006 and  2010.

Approaching his 21st birthday, the three-time Australian Horse of the Year is now retired at Natalie’s parents, Victor and Cheryl Rasmussen’s property at Delaney’s Creek. His constant companions are former pacers Major Cam and Simons Left.

“He has a lovely, quiet, nice life,” Natalie Rasmussen told Racing Queensland’s Jordan Gerrans during a recent visit back home.

“He deserves it, he has been such a wonderful racehorse …he has no stress, he just eats and roams around his paddock.

“Mum enjoys looking after him these days  …  I think she has 30-odd retired horses at the place, as well as a few rescue dogs – it is a lovely place.”

Cheryl, who makes sure Blacks A Fake is rugged up every night, is an undoubted fan, labelling him the best horse to come out of Queensland.

“It was quite unbelievable, to think we could get such a special horse like him.”

“He was just a great great horse,” says Natalie, “and I know people like to compare horses over the years and I have been lucky to be involved with great ones like Lazarus and Adore Me and other good ones in New Zealand, but I think this guy is just special because he was my sort of horse.”

“It’s an honour to have the race named after him every year.”

Saturday’s night Blacks A Fake features a stellar field that includes hotpot King of Swing, stablemate Expensive Ego, along with Copy That and Amazing Dream.

And there will be a Rasmussen factor at play, Natalie’s sister Vicki has two in the field, the former All Stars trained Turn It Up and LL Cool J, who had six wins when trained by Tony Herlihy, before heading across the Tasman last September.