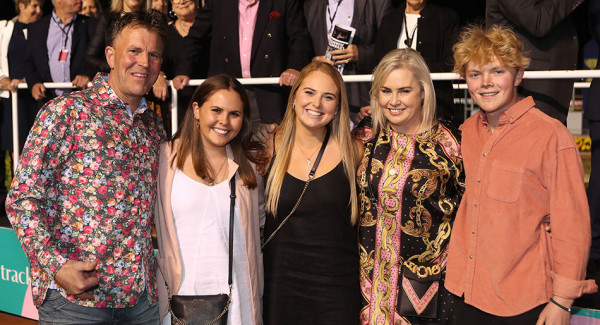 With family by his side and a spring in his step more milestones await Cran Dalgety after he notched his 1300th career win in New Zealand at Addington last weekend.

Refreshed and recharged following a short break from training this season, Cran can’t wait to start chasing down more milestones.

“It is a nice milestone to get, there have been a lot of thrills along the way.”

“I think the hardest thing about it is the consistency, you’ve got to consistently produce good results season after season.”

"Training lots of winners is nice, but targeting the best races, especially age group races, is the main target and we have been able to do that."

“There is still plenty of fire in the belly so hopefully we can kick a few more goals.”

Cran has trained 1231 winners on his own, 51 in partnership with Nathan Purdon and 18 with wife Chrissie Dalgety.

The Dalgetys are forming a formidable combination with two Group 1 derbies among their 18 wins.

With Carter Dalgety becoming a key part of Kentuckiana Lodge the stable is a real family operation and Cran is enjoying the ride.

“The best thing about Chrissie coming into the official partnership has been that sometimes you can’t see the forest for the trees – she brings another set of eyes and another perspective and that has been a real asset," Cran said.

“Carter is keen on the game and that has been a great for me, he’s learning off me and I am learning off him.”

“Knowing he wants to have a crack at things helps push me along.”

“We have got a great set up with Sarah doing so well and some good staff, so I am really enjoying things at the moment.”

“Its not the worst bunch to be amongst, to be fair,” Cran quipped.

“If he comes into barrier 2 on the second row that will be perfect," Cran said.

“We are not worried about not drawing handy on the front line, those horses are going to have to work hard early and there will be fireworks.”

“We would be quite happy to be bowling along in the running line."

Cran reported he has been thrilled with Krug following his gallant fourth in The Rising Sun a fortnight ago.