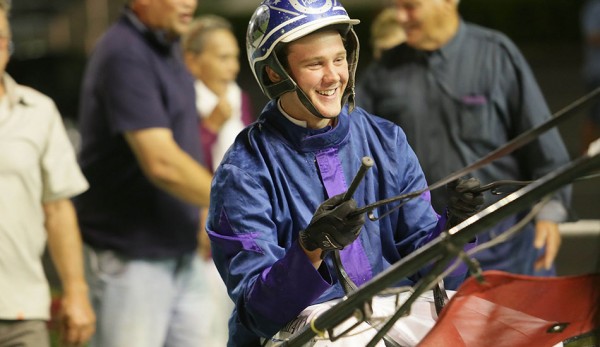 The Art Major filly looked awkwardly placed behind a tiring leader coming to the home turn, but got the sprint lane run just in time before holding-off a string of challenges, including Fiamma, Petillante and Sounds Perfect to win in a brilliant 1min55.1sec mile rate for 2180m.

It was nowhere near as impressive as she looked winning her first Aussie run, but it was a big jump in grade and there was a lot to like about how she kept finding when it mattered for driver Chris Alford.

And, importantly, she ran the quickest time of any Crown heat – colt or filly – on the day.

Purdon had to be content with second from his other recent Kiwi addition, A Bettor You.

Anthony Butt drove superbly to avoid being pocketed early and then finding the lead, but in a hostly-contested heat, A Bettor You couldn’t quite hold-off the finishing burst of Rich Beauty from behind him along the sprint lane.

The Emma Stewart and Clayton Tonkin-trained Rich Beauty zipped through to snatch a neck win over A Bettor You with another Stewart/Tonkin runner, Sergios Rocket, running a big and close-up fourth after sitting parked and pulling hard.

A Bettor You is sure to improve off the run given she hadn’t raced since winning the Harness Jewels on June 6.

Stewart and Tonkin snared the quinella in the other fillies’ heat when outsider Playing Up scooted home along the sprint lane and nabbed a very gallant Encipher in a deceptive photo-finish.

The Crown semis are at Melton on Saturday night with the finals a week later at the same track.

The most remarkable of the heat winners was Andy and Kate Gath’s raw, but exciting gelding Catch A Wave.

The son of Captaintreacherous led from gate three, but skipped for a few strides and then pulled very hard throughout for Kate Gath, running his first three splits of the last mile in 28.8, 29 and 27.1sec.

But he kept finding in a 28.7sec closing quarter and scored by 5.2m over Emma Stewart’s trio Muscle Bart, Lightning Dan and Beach Villa.

“He started kicking the sulky rest which is why he got so fired-up,” Kate Gath said.

Hes Charlie Angel also looked raw and raced keenly when he found the front and won his heat in a much slower 1min59.1sec mile rate.

The other colts and geldings' heat produced a huge upset when Greg Sugars drove a gem of a race on $51 chance Brutally Handsome to beat another roughie, $41 chance Flash Jimmy.

The big fella is back.

Disappointed by Expensive Ego’s Len Smith run, driver Luke McCarthy showed the Chariots Of Fire winner some tough love at Menangle on Saturday night and it did the trick.

The four-year-old powered to victory by 11.8m in a scorching 1min48.7sec mile and booked his spot in the upcoming Inter Dominion series.

“It was a crunch race for him. It was a below par run in the Len Smith, but I think I’d have been better putting right into the race, so I made sure to do that this time,” McCarthy said.

“The owners were keen to go to the Inter Dominion, but he needed to show he was where we needed him to be and he did.”

In a run that was reminiscent of his Chariots win, McCarthy just kept working forward from a wide draw, being three-wide for the first half, before eventually finding the lead and just kept going.

The doubters will argue he didn’t beat much of a field, but it was the way he did and the time he ran which showed he was back to his best at the right time.

The rising 10-year-old just held off improving former Kiwi One Majoc Kenny to score by a head.

Still on Team McCarthy and King Of Swing will go into the Inter Dominion first-up.

“He’ll have a really good hitout at Menangle the week before the series start, but he won’t race before it,” Luke McCarthy said.

“He won’t need to. We can get him very fit and he can build as the series goes on.”

King Of Swing has been freshened since finishing third to Max Delight in the Victoria Cup at Melton on October 9.

Injury-plagued star General Dodge is starting to make up for lost time.

The rising nine-year-old has been riddled with setbacks and injuries and limited to just 26 starts.

But, after an indifferent start to his latest comeback campaign, General Dodge has looked stunning winning the Geelong and Yarra Valley Cups.

At Geelong he blew away champion mare Amazing Dream, then Yarra Valley last Thursday was something to behold as he came from near last, faced the breeze for the last 1200m and posted his own closing splits of 54.1 and 26.2sec.

“He had plenty left, too. I didn’t pull the plugs,” driver Jason Lee said.

Trainer Mick Chircop said the $60,000 Group 2 Breeders Crown FFA on November 19 was next.

“Then he’ll go to some of the bigger country cups in Victoria on his way to the Hunter Cup and then, all going well, Sydney for the Miracle Mile,” he said.

General Dodge’s speed and talent is stunning and, providing he stays sound, he will be a much-needed addition to Australasia’s thin open-class ranks.

And he’s still got his WA Derby winner Mighty Ronaldo waiting in the wings, too.

Major Martini looked a future star at three when he won the Western Gateway and was a monstrous second to Patronus Star in the 2020 WA Derby.

Injury hit and he hadn’t raced since that Derby on April 3, 2020 until he returned last Friday night.

It was a low-key win with driver Gary Hall Jr spearing Major Martini to the front from gate two, dawdling through a 62.4sec first half and zipping home in 55.5 and 28.1sec to win as he liked.

Hall Jr had another huge night with five wins, starting with a brilliant display from former Kiwi colt Youre So Fine in the opening race, who blazed a 1min54.9sec mile rate for 1730m to win by 21.2m.

Youre So Fine is trained by his father, Gary Sr, who also prepared Hall Jt’s other three winnners: Diego, Alta Blues and Finvarra.

The Peter Hanson-trained four-year-old made it four wins on when he overcame an outside back row draw to win the Group 3 Be Good Johnny Sprint (1660m) in a 1min52.2sec mile rate at Albion Park on Saturday night.

The time was set-up when the brilliant Turn It Up had to blaze a 26.6sec opening quarter, but Mach Da Vinci still had to come from last and run his closing half in 55.6sec to score,

It was the opening night of Queensland’s Summer Carnival and other highlights included exciting three-year-old Uncle Shank posting his ninth win from just 12 starts in the $50,000 Group 2 Peak Of The Creek final.

He's not the biggest name in the powerhouse Emma Stewart and Clayton Tonkin barn, but Our Millionaire is a terrific money-spinner.

The five-year-old took full advantage of a pole draw to lead throughout and stave-off Idealsomemagic to win Saturday night’s St Arnaud Pacing Cup at Melton.

It was a big finish to the night for Craven, who also won with his stable star Pink Galahs.

The brilliant four-year-old is bound for the NSW Inter Dominion trotting series, starting at Menangle on November 27.