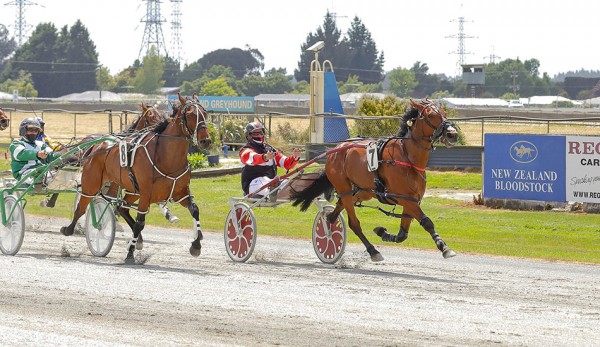 Peter Hunter’s 100th training win with Justalittlesip at Ascot Park on Sunday was made more special by it being an all-family affair.

Going into race 2 with three eye-catching fourths from back into the field, Hunter took control of his pacer’s fate by sending him to the lead which set up his impressive and well-deserved victory.

Justalittlesip is raced by his trainer-driver, his wife Jo and her brother Brendon McIntyre and his wife Jaque.

McIntyre is a member of the Whatever Syndicate that raced Justalittlesip’s sire, Franco Ledger.

The stallion was formerly trained by Hunter’s brother Hamish and won multiple feature race titles among his 25 career victories, as well as being crowned Southland Horse Of The Year twice.

Justalittlesip is the first winner among 16 live foals sired by Franco Ledger before his sudden death a year ago.

Hunter admitted he wasn’t counting down his 100th win, which he considered to have come during just another day at the office.

However, to reach the milestone with a son of Franco Ledger raced by his family did made it special for the Ryal Bush trainer.

“It was good to get it on a Franco Ledger and with everyone involved that made it a bit more special,” Hunter said.

Franco Ledger was known as a pocket rocket with a devastating turn of speed.

While his son Justalittlesip has shown he shares some of that turn of foot, he is a much more imposing figure, suggesting he gets his size from his dam, Justasip.

“His mother wasn’t a big horse and everyone knows what size Franco Ledger was.”

“We trained Justasip, she was raced on lease by Ivy Keenan and were able to get a foal out of her.”

“James Geddes owns her and he has been great to us, she’s a lovely mare and we were rapt to be able to get a foal out of her.”

“For it to be Franco Ledger’s first winner is pretty special.”

“Hamish (Hunter) has followed the horse from the beginning and he was pretty chuffed.”

Hunter started his journey to 100 wins at the annual Tuapeka Harness Racing Club meeting in 2003 when scoring with Only The One.

He brought up win 99 at this year’s Tuapeka meeting with Rakareplay, who like Only The One is raced by breeder-owner Brendon Fahey.

Hunter credited Brendon Fahy and Brendon McIntyre for the big impact they’ve had on his training career.

“The two Brendons have been the backbone of my stable.”

“Jo has also been a big part of my success, she was the driving force for me to go out training in the first place.”

“She does a lot of work with the horses and deserves a lot of credit.”

Hunter’s win with Justalittlesip was his 136th as a driver.