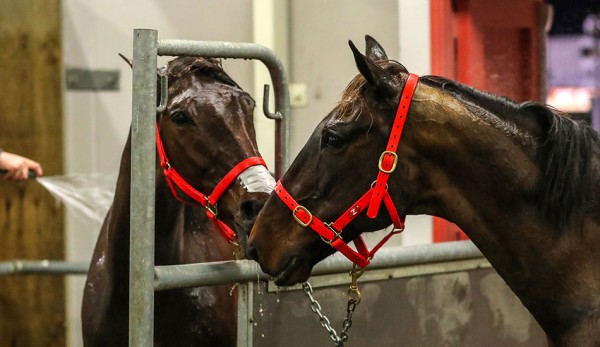 The horseman with the biggest hand to play in tomorrow’s $600,000 IRT New Zealand Cup is putting those cards on the table, giving punters crucial information heading into the great race.

John Dunn is the No.1 driver and unofficial trainer partner in Diamond Racing, the catchy brand name of the premiership winning stable run by his father Robert and John’s wife Jenna.

It may be a family business but John is the face of it as he is also New Zealand’s second leading driver and his actions on the track dictate so much of the stable’s success.

They go into the Cup with four starters tomorrow, a huge feat although remarkably not their best as they had five starters two years ago, when Classie Brigade finished a slightly luckless third.

That would have seemed his best chance to win the great race but after a stomping victory in last Monday’s Kaikoura Cup followed running Cup favourite Self Assured to a head in the Flying Stakes at Ashburton, Classie Brigade looks to be in the form of his career even as a eight-year-old.
Dunn doesn’t know why.

“He is racing super but we haven’t changed anything,” says Dunn. “He just seems sharper and is sprinting really well and that is why we have been taking a trail with him, it has been bringing out his best.”

Dunn says that will almost certainly be the case tomorrow and that could shape the race as Classie Brigade is a fast beginner from the stand but has the respect to get the lead off any of the outsiders and then hand to who Dunn would like to follow.

“That is what I’d like to do, take a trail on the first or best one of the other three,” he says.

That “other three” are Copy That, Self Assured and South Coast Arden so Dunn is suggesting, as much as anybody can know how chips will fall in a standing start, that the lead may be there for the best behaved of the favourites.

That is encouraging for Copy That, the Auckland speedster who has drawn wide on the front line while the other pair are drawn on the second line, suggesting traffic could be more of a concern for them.

Securing the lead by no means guarantees victory but it is the shortest way to the winner’s circle after any major harness race and Copy That’s best career performances have been when he has led.

Copy That has been the best backed in early betting, albeit not the hard money bookies fear most, but is in from $4.5 to $3.8, part of that move coming because of the scratching of Pembrook Playboy.

Dunn suggests punters will have to wait until the last of tomorrow’s 12 races for his best winning chance of the day, Dashing Major who drops back in grade.