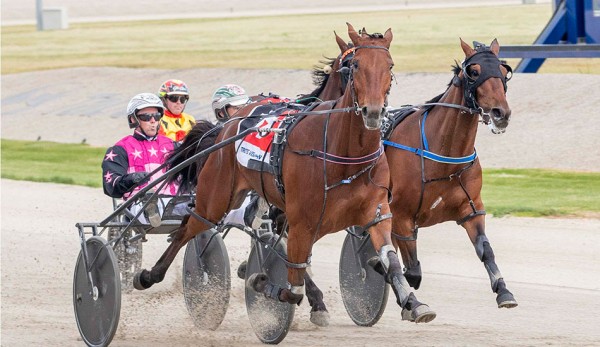 There is no more exciting pacer in Australia than Honolua Bay.

The way he won the Group 2 Breeders Crown 4YO Entires and Geldings final was something to behold.

A veteran of just 18 starts for 11 wins, Honolua Bay came from near last out three-wide without cover for the last 1200m and paced his final 800m in 53.9sec.

Just when you thought he had to peak on his run, driver David Moran clicked him into another gear.

"He's pretty special," owner-breeder Bill Anderson said. "He had a minor throat operation for his breathing after last campaign and he's come back so well.

"He's so fast, the Miracle Mile is the race we've always thought would suit. That's where we're aiming."

Honolua Bay's trainers Emma Stewart and Clayton Tonkin won six of the 10 Crown finals, including the other 4YO final for mares with Maajida.

Tango Tara really deserved that one.

The former classy Kiwi pacer has been racing in fantastic form, but without any luck in strong races.

With key runner Willie Go West scratched from gate two, Kate Gath worked forward and found the front on Tango Tara and dictated the terms to her liking.

The gifted but injury-plagued General Dodge loomed large on the home bend, but peaked on his run after having to sustain such a long run without cover in a blistering last half.

Tango Tara kept finding for Gath in the $60,000 Group 2 Breeders Crown Free-for-all and staved-off a late challenge along the sprint lane from Supreme Dominator with General Dodge third.

“Before the scratching, it looked a nothing draw for him out in six, but Willie Go West changed it and when he found the front, I thought he’d take plenty of running down,” trainer Andy Gath said.

General Dodge’s effort to come from near last, three-wide without cover and run his own last half in defeat in 54sec flat.

Tango Tara has been a great addition to Team Gath with his 18 starts since coming across from NZ in May returning five wins and eight placings.

Sometimes we forget Im Ready Jet is still a bit of a baby.

The four-year-old mare has run so many terrific races in the big league and she’s a superstar in the making.

So she really enjoyed getting back to race her own age and sex in the $30,000 Group 2 Breeders Crown 4YO Trotting Mares’ final at Melton on Friday night.

Im Ready Jet zipped straight to the front, went through the middle half in a solid 58.9sec and down the back in 28.3sec, but still seemed to cruise home in 29.3sec.

By comparison, Im Ready Jet’s 1min57.5sec mile rate for 2240m was much quicker than Powderkeg went winning the 4YO Trotting Entires and Geldings final in 1min59.6sec.

The feature trot of the night, the Group 2 Breeders Crown free-for-all, produced a huge upset when Sundons Courage stormed home from near last to win at $60.

It was the eight-year-old’s 23rd career win, but broke a 28-race losing streak.

Bling It On’s younger brother Bletchley Park keeps making a name for himself.

The Stephen Reed-trained five-year-old showed he was a genuine contender for Perth’s two biggest races, the WA and Fremantle Cups in January, with terrific front-running Gloucester Park win on Friday night.

Sure Bletchley Park led from gate two, but the race really hotted-up with a 27.2sec second split and he fired-up on driver Linsday Harper to open-up a huge lead down the back straight in a 27.6sec split.

The frantic midrace tempo cooked former star Victorian Hurricane Harley, who was posted outside the leader and weakened to finish a distant last.

The other class runner, Mighty Conqueror, galloped when poised beautifully in the one-one trail and wiped-out stablemate Galactic Star.

Hurricane Harley’s trainer Justin Prentice and driver Gary Hall Jr had some joy later in the night when comeback star and former WA Derby winner Major Martini made it two-from-two after a long stint on the sidelines.

He proved nothing with a dawdling 2min0.7sec mile rate for 2130m, but looked sharp ripping home in 26.3sec.

Here’s hoping he stays sound and pleases Prentice enough to tackle the WA and Fremantle Cups.

Unfortunately, she fibrillated in trackwork last Wednesday which forced her scratching from the stellar Breeders Crown 3YO Pacing Fillies’ final at Melton last night.

“All the tests looked good straight after it and we could’ve got her back-up to defend her Vicbred crown, but we’ve decided to give her a good break and no worry about that,” managing owner Craig Judd said.

“The owners have had such a great ride with this filly and we’re keen to race her on for another couple of years, so we’re doing what’s best for her now with that in mind.

“She’ll have three or four months off now and we’ll reload for the big mares’ races next season.”

Tough Tilly ran second in last year’s Crown 2YO final before winning at Group 1 level twice in the Vicbred 2YO and Australian Gold 3YO finals. She’s raced 21 times for 10 wins, seven seconds and banked $361,633.

The Pay Me Christian seven-year-old worked to the front from a wide draw, took the sit on star speedster Cash N Flow and overpowered him late to win by 4.1m in a 1min51sec mile.

The star of the night at Menangle was former Victoria Derby winner Muscle Factory, who blitzed his rivals for Luke and Belinda McCarthy in a scorching 1min49.5sec mile.