Winning double for Matthews at Manawatu 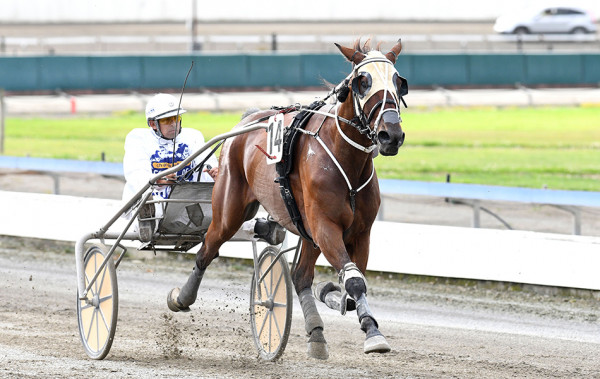 It’s a long trip down from Pukekohe to Palmerston North, but a winning double at Manawatu Raceway on Tuesday made it all worthwhile for trainer Adrienne Matthews.

The Hulk kicked things off with a bang in the Completely Wired Handicap Trot (2500m), making light work of his 40m handicap and running away to a 6-1/2 length victory.

The win was a great tonic for Matthews, with the South Auckland horsewoman having spent a lot of time trying to overcome soundness issues with the seven-year-old gelding, who last raced at Alexandra Park in September last year.

He was given a long spell and Matthews has incorporated a lot of swimming into his work in order to alleviate pressure on his joints.

“He had quite a few issues last year with soreness,” Matthews said. “He had a big spell and he has been back just working up slowly.

“We have had him down at the pool swimming and I think he is feeling a lot better in himself and I was rapt for him.

“He does swimming two or three times a week instead of jogging, just to get him off his legs and keep him happier.

“He is such a lovely, big horse and he always puts in. It was just good to see him back going as well as he can.”

A few races later Matthews was back in the winner’s circle with The Blue Beat in the Brendon Towers Plumbing Mobile Pace (2500m).

The five-year-old mare had drawn one on the second row and she was able to maintain the trail position throughout.

Matthews was in the bike and was able to navigate her up the passing lane where The Blue Beat was able to get the better of pacemaker Peter Forsberg by half a length.

“It was a good draw, she got a great trip, and the race was run to suit her. They ran at a good, even tempo,” Matthews said.

The daughter of A Rocknroll Dance had pleased Matthews in her last few starts, including a last start runner-up effort at Cambridge Raceway earlier this month and Matthews was pleased she was able to get an elusive win on Tuesday.

“Her last couple of starts have been quite good and probably in tougher company,” she said.

“It was well deserved by her, but she got the trip and capitalised on it.”

Both runners will back-up at Manawatu Raceway’s Thursday meeting, along with stablemate Cepheus who finished unplaced behind The Hulk on Tuesday.