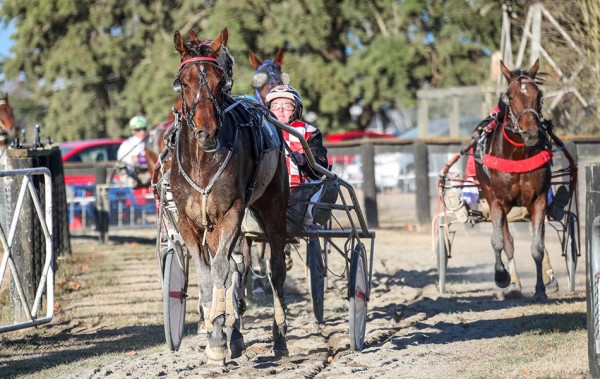 As he has done throughout his career, Rachmaninov put his head down and determinedly chased down career win number five at Rangiora on Sunday.

The hardy seven-year-old scored in his 125th start for his co-breeder-co-owner-trainer and driver Trevor Grant when reeling in the leader Red Harbour in the final 100m of race 6.

Grant landed a perfect run in the one-one for Rachmaninov and when he called upon him before the home turn he knew exactly what he was going to get.

“That is just what he does, he is pretty one-paced,” the trainer-driver said.

“If you can just not do too much early – though he does have gate speed I decided not to use it from out wide.”

“The one-one was ideal, but there was no point waiting until we get to the straight because by then everything is sprinting and we have got no speed.”

“I think this year he has had four starts on the grit at Rangiora for two wins and two fourths.”

“So it wasn’t a complete surprise.”

With 36 starts so far this season, Grant has kept Rachmaninov busy.

“If you leave him around home too much he starts chasing the filly – he has got a sister out of Star Of Aspen by Royal Aspirations.”

“If you are not working him he can be a bloody nuisance so it is best to keep lining up.”

Rachmaninov is from dual gaited In The Pocket mare Starwood Of Aspen, a half-sister another two of Grant’s winners The Rusty Pelican and Minstrel Of The Dawn.

The trainer discovered Starwood Of Aspen’s trotting talent in trackwork with the late Derek Jones.

The mare went on to win four trotting race and has turned Grant’s breed towards the trotting gait.

As Rachmaninov's co-breeder-co-owner-trainer and driver, Grant and just one other person should be credited, his partner Yvonne Pycroft.

“She is stable foreman and she goes and jogs him in one cart and I will have the baby in the other one.”

“She does a really good job.”

Two 1390m races were held at Rangiora on Sunday and both winners blew away the theory that a horse must draw on the inside of the front row to win sprint races.

The Brendon Hill trained three-year-old overcame drawing the outside of the front line to win race 4 for driver Ricky May and his big group of owners, the goHarness Hoofin Around Syndicate, the goHarness No.9 Syndicate and Noel Kennard.

Archman drew barrier one on the second row and got well back on the inner in race 8 before producing a stunning final 100m burst to win for Southland trainer Shane Matheson, driver John Dunn and owner Judy Dillon.