Willis on the board 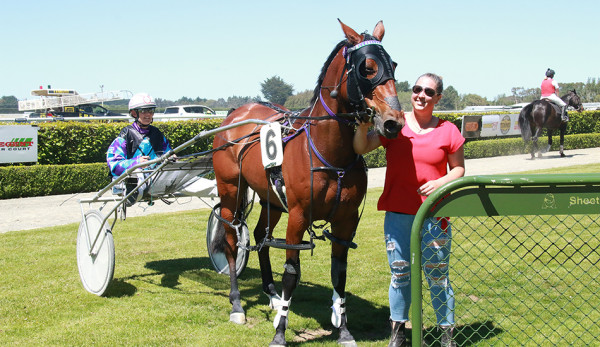 Brittany Willis added race-winning trainer to her list of equine skills when Money Honey scored a deserved win at Ascot Park on Wednesday.

Willis had the five-year-old primed for an excellent performance and Money Honey delivered exactly that when proving too tough after parking out for a good part of race 1.

The Branxholme trainer had gone close to tasting victory recently when her pacer produced top-five finishes in five of her previous six starts.

On Wednesday, Money Honey broke through for victory and it took Willis’ breath away.

“I have just started breathing again,” the trainer said immediately after her win.

“It was her sixth or seventh start for me and she has always been bringing home a cheque, which has been really nice.”

“This is my first season as a trainer and this is the first racehorse I have trained.”

“I have always had young ones before.”

“We thought we were knocking on the door, but it just hasn’t happened until now.”

“It is awesome – really exciting.”

Though she is a newcomer to training, Willis is no stranger to hands-on work with racehorses.

Through her business, Foveaux Standardbreds, the horsewoman has prepared yearlings for sale, broken in and pretrained horses and offered a foaling service at her property.

“I have been breeding one or two horses for the last five or so years.”

“I have done a bit of breaking in and just all sorts of things – weaning a few foals and foaling down a few mares.”

The multi-talented Willis also drives trucks to “pay the mortgage” when she is not working with her horses.

Her breakthrough maiden victory comes at an exciting time in the horsewoman’s career.

She is currently in the process of applying for a joint trainer’s licence with Ascot Park horseman Jeremy Douglas.

“We are going in together and we are going to start a team,” Willis said.

“We have got six in work and we are just getting the paperwork lined up.”

“We just opened a joint bank account yesterday because we had to have that first before we do the partnership papers.”

Driver Samantha Ottley was not going to be unlucky and it paid off when Money Honey scored in the smart time of 2-42.7 for 2200m.

The reinswoman took the mare from the rear of the field to sit parked and she held out Skidaddle by three-quarters of a length.

Ricky May was the star of the ‘Battle Of The Sexes’ driver’s competition at Wednesday’s meeting, taking out three of its five heats.

That saw the men’s team edge out their female counterparts in the series.

May won the first three heats, starting off with a front-running victory with the Ross and Chris Wilson trained Swift Robyn in race 2.

May again used front-running tactics when taking Kiwitrix straight to the lead before he cleared out to win race 3 by three lengths.

The champion reinsman then came with a brilliantly timed finish with Onesmartfella to take out race 5.