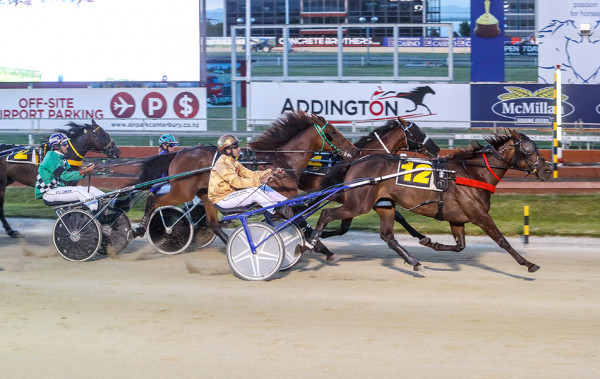 In typical Williamson style, three of their victories came with trotters with Matthew driving Miss Crazed and Missalyssa to win.

He then continued his winning run when making the most of a catch-drive behind Nirvana Beach.

Missalyssa produced yet another excellent performance when doing plenty of work to find the front in the first lap of race 9.

The Andrew Faulks trained mare shrugged off that burn when digging deep to score her sixth career win.

“I just tried to keep her trotting early, but then we got left three-deep so we had to push on,” Matthew Williamson said.

“It was a brave effort, she has raced like that a lot.”

“She is used to doing her share of work and still kicking on, it was a good effort.”

Despite running a huge race in her last start when second from a 10m handicap on the tight turning Roxburgh track, Missalyssa was let go at 10/10 in the betting on Friday night.

Miss Crazed relished the wide-open spaces of the Addington track and the slotting into a rating 40-54 event in race 2.

“The race was assessed right for her, in that grade she can do a bit of work,” Matthew said.

“She is better following a helmet but in that kind of race she doesn’t have to.”

“The bigger tracks are an assist for her too, she is a giant of a horse.”

“She likes the big tracks and she did trot nice and to do a bit of work and hold them off over the short trip was a big effort.”

Nathan Williamson had an even bigger trek home than his Oamaru-based brother following his double on Friday night.

His trip up from Southland was made worthwhile when Dark Horse justified her favouritism for race 7.

Known as a sit sprinter, Dark Horse showed she was at the top of her game by handling mid-race work before letting down with her customary finish to score.

“She can do work when she is on song like she is at the moment,” Nathan said.

“She can do it if need be, it is not her best option.”

“But tonight I didn’t have any other option.”

“She is just a great mare and she is in great form.”

With plenty of good trotting races coming up at Addington, Dark Horse will be back up the road from Southland again soon.

“I was going to race her here again next week, but I have decided against it,” Nathan said.

“I will just take her up for the Summer Free-For-All, the group 3 race in three weeks time.”

“She doesn’t mind her races being spaced, if need be I can give her a trial at home in between.”

Williamson continued a winning week that started with brilliant victories with Pembrook Playboy and Ragazzo Mach at Winton on Wednesday by rating Nirvana Beach perfectly in front to win race 10.

“He looks like one of those horses that if you don’t argue with him he is good,” Nathan said.

“So we didn’t argue and he kept rolling and Brad (Mowbray) had him spot on.”

Nirvana Beach has won three of his seven starts for the Mowbray stable and those victories have all come in his last four outings.