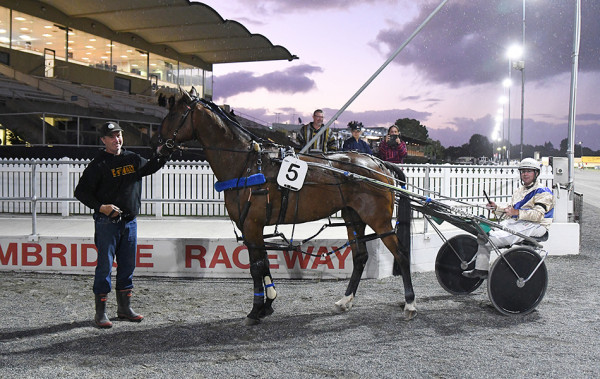 Raglan trainer Chris Webber normally wins a couple of races a season, so he was over the moon when he recorded a winning double at Cambridge Raceway on Thursday.

He got off the mark with Bugalugs in the Check Out The Corporate Packages @ Podium Lodge Mobile Pace (2200m).

The seven-year-old gelding was given a perfect trip throughout in the one-one by driver Peter Ferguson before being presented at the top of the straight and running away to a head victory.

Webber owns the gelding in partnership with his father, Ken, who gave his son some advice after Bugalugs’ last two placings.

“My father, Ken, just told me to work Bugalugs a little bit harder,” Webber said. “I wasn’t working him hard enough, so that might have done the trick.”

Webber’s evergreen pacer Fleeting Grin secured the double for Webber when flashing home late for Ferguson to take out the Save The Date – Cambridge Gold Cup Feb 6th Mobile Pace (2200m) by a head.

“I was just stoked for the old horse. I have had a few problems with him,” Webber said.

“Two years ago there was an incident with his legs in a race and he has never really been the same since. He is really just a mate for the other one. They have buddied up.

“He was well driven and was saved for the last run. He just tries so hard, he has got a big heart.”

It’s been a tough week for Webber’s extended family, with the passing of family member Hugo Shaw, and he said he hoped it gave his family some reprieve in such a difficult time.

“My cousin, Hayley, lost her boy Hugo during the week in a road accident,” Webber said.

“Hopefully that might have given them something else to think about for a couple of minutes.”