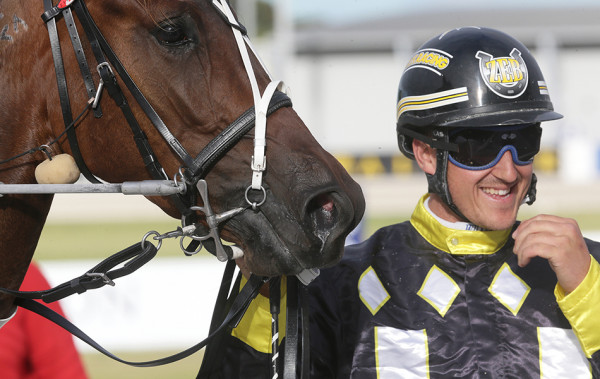 The three-year-old son of Changeover is raced by his Nana, Colleen Butcher, and the Estate of his Grandfather, John.

“It was pretty exciting,” Butcher said. “We are all in the game to get those thrills and it was a pretty cool night.

“Nan made the trip up, so seeing her in the winner’s circle was pretty special. I even shed a tear.

“She enjoyed it a lot and it’s been a while since she has had one at the races.

“It was just great to get it for Nan and the rest of the family.”

Butcher was confident of a solid debut performance after Zarias’ three trial wins, and that was justified with a half-length victory over Cowboys N Bandits, with a further half-length back to Bettor Listen in third.

“He had shown enough at the trials and there was still a bit of improvement in him,” Butcher said.

“He is going to have to keep stepping up into those tougher grades. To me he has got the ability to do it.”

Butcher is now eyeing loftier targets with his charge, including a possible tilt at Classic assignments.

“We are looking at possibly going down south for a $40,000 race for horses bred by lesser stallions you could say. He has come through the run pretty well, so we will aim for that,” he said.

“We might nominate him for the Derby and see what happens.”

While Zarias may have piqued the interest of a few bloodstock agents, Butcher said they may look at keeping him for the meantime.

“The offers might come in but I think Nana is pretty keen to race,” he said. “It’s not often that you get a horse that goes out and wins a maiden like that, so you have got to enjoy it.”

Later on the card Butcher secured a training double when Call Me Trouble made it three wins on-end in the SBSR Follow Us On Facebook & Harnesslink Handicap Trot (2200m).

“He went good again and he did everything right,” Butcher said. “I looked at dropping in behind, but they were going a bit slow, so I was going to have to pull back all the way to last, so I let him run up and he got to the front easy enough.

“He was sensible after that. He was able to take a trail and won it quite comfortably in the end.”

To top off the night, Butcher made it three wins in the cart when steering Raven Banner to victory in the SBSR Diamon Creek 2YO Group 2 Classic Sun May 2 Mobile Pace (2200m) for trainers Barry Purdon and Scott Phelan.

“He just rolled over the top of them, it was a good run from him.”

On Saturday, Butcher was pleased to qualify three-year-old gelding Jezonias at the Auckland trials, but his future is destined with another trainer.

“I qualified him and he is going to head down to Scott Dickson’s and maybe race down in Palmerston North,” Butcher said.

“It’s a bit hard for me to travel back-and-forth there, so he will have a crack down there and hopefully they can win one down there.”