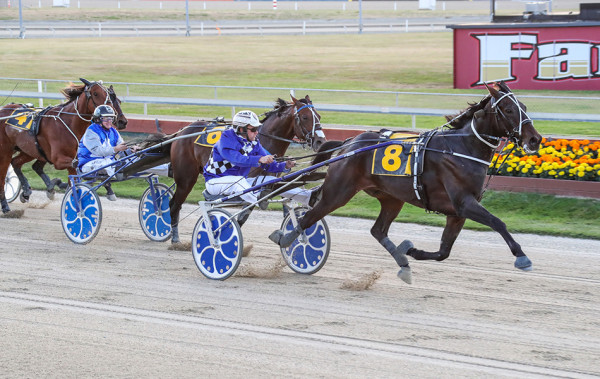 Chinese Whisper bucked an Addington trend when announcing himself as an open class force on a big night for Nathan Williamson’s trotters at Addington on Saturday.

Sprint races from the much talked about mile starting point at the Christchurch track are supposed to be won by horses that draw handily and race on the speed.

But Chinese Whisper did neither when flying home from four-deep on the pegs for a stylish win in his first start north of the Waitaki.

And its clear that brilliant speed he showed is going to be a major asset as the Sundon trotter continues to establish himself in open class.

“He has got a lot of speed, that was a really good performance,” Williamson said.

“To run down Oscar Bonavena is not mean feat, he is a very good horse.”

Patience has been the key to Chinese Whisper’s rise to the top grades for Williamson, wife Katie and her fellow owner, Brendon Franks.

The trotter has always had plenty of class and has been hyped to be well above average since his debut as a three-year-old.

Just 13 starts over three seasons since then demonstrates just how patiently Williamson has been with Chinese Whisper.

“We have been patient with him and taken him along quietly and got him ready to be able and come out and do something like that tonight.”

Williamson doubled up and completed the rarest of quinellas when his towering five-year-old Andy Hall took out race 8.

The trotter added to his fine record at Addington when holding out Son On Patrick, who Williamson co-bred and sold at the National Yearling Sales.

The trainer also bred and trained Son Of Patrick’s half-brother Kiwitrix to run fourth in the same race.

Andy Hall showed outstanding staying power when coming from barrier 9 over 1980 to win after sitting parked in the middle stages.

“It was a really big effort, I had to ask him and he really dug in,” Williamson said.

It is no coincidence that his best performances have come at the South Island’s premier harness racing track.

And it’s not just the wide-open spaces of Addington that suit the big striding five-year-old.

“The thing with him is when it gets tough that is when he is really at his best.”

“When they go hard and the pressure goes on he thrives on it.”

“He is a really nice big horse.”

Willaimson’s stable star Pembrook Playboy flew home for fourth behind Self Assured in his first Group One test in the Easter Cup.

The four-year-old will be back at Addington next week to square off with Self Assured and Amazing Dream in the Group Two Superstars Championship.