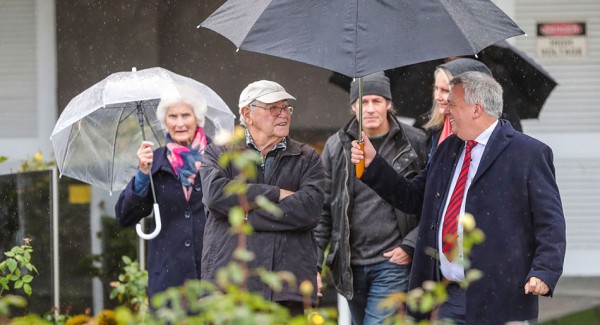 The weekend deluge was the biggest Fletcher has seen in his lifetime, but he said the quality track at Addington meant racing on Sunday was never in danger.

“It’s always good getting a double, especially on a wet day,” Fletcher said. “It was absolutely shocking, I have never seen so much water around Canterbury.

“But Addington is a very good all-weather track, they can always hold their meetings when they have huge amounts of rain.”

Luminite got the day off to a perfect start when winning the opening race of the day, the Spectators Iconic Kiwi Roast Mobile Pace (1980m).

The six-year-old mare was taken straight to the front by Blair Orange where he was able to set the pace throughout. She kicked clear of her opposition when turning for home and maintained her advantage, running away to a 3-1/2 length victory over Leconte.

Luminite took a series of placings into the race, and Fletcher thought she was a good chance of breaking maiden ranks on Sunday.

“I thought she was the best horse in the race by a longshot,” he said. “It is the first time we have put her in front, and she is a very good front-runner and proved that today.”

The Royal Aspirations gelding showed a blistering turn of foot late to run down leader Unique Rose to win by half a length.

Royal Del had qualified for the Gr.1 Mitre 10 3YO Ruby (1609m) at Cambridge Raceway next Sunday, but the quality of the field led Fletcher to keep him at home.

“He is a very nice horse,” Fletcher said. “We were in the Jewels with him, but the 3YO Ruby is one of the best fields on the Jewels programme, so we stayed at home.”

Fletcher had also qualified Royal Pride for the same race, however, he succumbed to illness on his northern campaign.

“I had sent Royal Pride up there (Auckland) for it, but he got really crook up there and he is going to come back into work the day after the Jewels.”

Fletcher has enjoyed a busier than normal season with more than 100 starts, and his double on Sunday has brought his season's win tally up to 10, and 501 training wins in total.

“I thought today was our best chance of picking one up (win) for a while, and we ended up getting two, which was great,” he said.