Two races in two days no problem for Maui 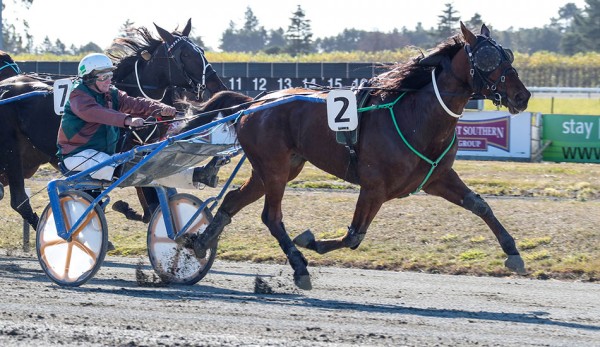 Mid Canterbury trainer-driver David McCormick has the Harness Jewels in his sights, after his three-year-old trotter Maui capped off a busy 24 hours with a win at Ashburton yesterday.

The Peak gelding got a perfect run for McCormick to get home by three quarters of a length from Rogie Falls and the favourite Miss Crazed in the Liquorland Racecourse Road mobile trot over 1700 metres.

It was a quick turnaround for the horse, after running fifth behind winner Outamyway at Addington on Friday night.

“It was a top run, he was parked and he kept battling.”

Then the decision was made to back up at his home track on Saturday afternoon.

“I watched him in the paddock after his race and he was drinking and eating and he looked all good so I knew he’d be fine.”

It’s not common practice to start a horse twice in two days but MCCormick says “it’s not that unusual”.

Maui was so named after McCormick’s grandchildren were watching the movie Moana.

“They said we should call our horse Maui so I put it through and it got accepted.”

Maui has now won two from 17 – “if he learned to trot all the way he would have done better from what he’s done.”

“I am looking at the Jewels, he’s currently 14th.” 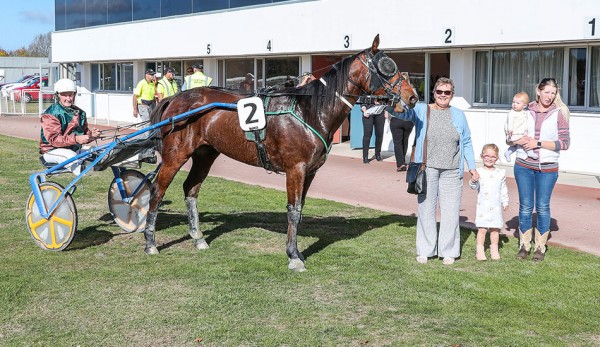 The top 12 in each category will make the Jewels at Cambridge on June 6, and in Maui’s division, the 3YO Ruby, he’s up against some real class including Five Wise Men, Leaf Stride, Time Up The Hill, Wanna Play With Me and Son Of Patrick.

“We need a bit more money and we will line up again next week,” says McCormick.

Ashburton also saw a return to the winner’s circle for Taxman and trainer Wayne Low.

Formerly with the All Stars stable, Taxman won at long odds ($16.40) for Low and driver Sam Ottley. It was Taxman’s fourth win in 22 starts and his first since October 2019, while Low’s last win as a trainer was with Aveross Rustler at Forbury Park in September 2019.

It was another top outing for driver John Dunn. Fresh from his three wins at Alexandra Park on Friday night including his Group One triumphs with Five Wise Men and Sundees Son (Rowe Cup) Dunn had two more wins with favourites Highgrove and American Sniper.

For Highgrove it was a dominant eight length win and his fourth in five starts while American Sniper was having his first start from the Dunn stable, after debuting for trainer Henderson Hunter.

Dunn’s hot streak has him at a career best 117 wins so far for the season.