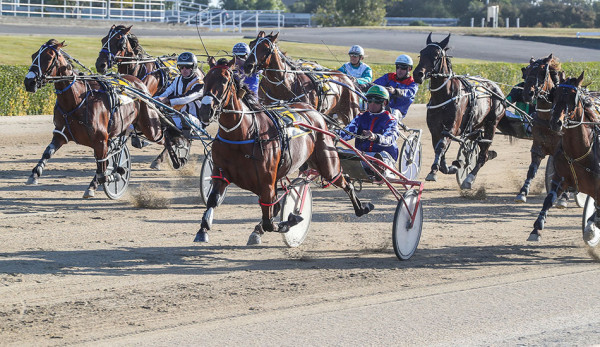 The future is looking bright for Trinity Star after she picked up her second win from just four starts at Addington Raceway on Thursday night.

The Waikouaiti pacer was sent forward from her wide draw by driver Blair Orange to take an early lead in the Spectators New $15 Daily Deals (Fillies & Mares) Mobile Pace (1980m).

The pair were left untouched up front and the daughter of Mach Three was able to run away to a comfortable 1-1/4 length victory.

Hoffman was pleased with her mare’s winning effort but said there is still plenty of improvement left in the four-year-old.

“I was really happy with her, she is still a bit green, but she did it easily enough. She has still got a lot of improvement in her yet,” Hoffman said.

“We were pretty confident with her heading into tonight, just as long as she did things right.”

Hoffman was happy with how Trinity Star handled her first trip away to Addington and she is excited about the future with her charge.

“It is her first decent trip away and the main thing was that she got around in one piece and did everything right,” she said.

“We still haven’t seen the best of her because we haven’t really asked her to do too much.

“We haven’t put a lot of pressure on her yet. It will be interesting to see how far she goes through the grades.”

Raced by prominent owners Merv and Meg Butterworth, Hoffman said she will talk through potential targets with the couple.

“I will just see how she is in the next couple of days and work out a programme for her with the owners,” she said.

Hoffman now sits on 13 wins for the season and she said she is happy with the way her select race team is performing this term.

“We have got about 25 in work at the moment,” she said. “There are a couple of nice ones there but they are not going to be ready for another 12 months.

“We haven’t got an overly large race team, we have got a lot of babies coming through. But the race team is doing a nice enough job.”