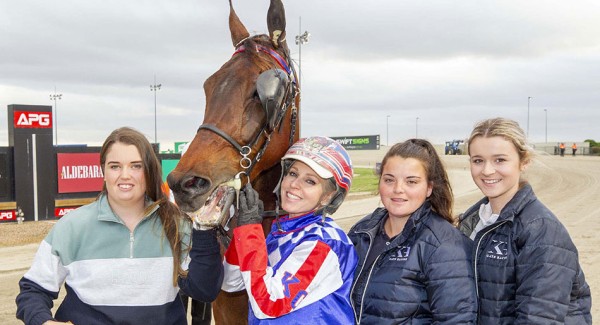 Gath was adamant the patience and development work Terry McMillan and Petina Gaugler put into Tornado Valley before he left NZ to join Gath’s helped make Tornado Valley and give the rising 10-year-old his longevity.

“The gave him every chance, really took their time with him and didn’t overrace him before he came across to us. We’re really appreciative of that,” Gath said. “We’re still in touch with them and I’m sure they’ll get a huge thrill from tonight as well.”

Tornado Valley headed to Melton assured of topping the million, but it was only fitting he did it with a runaway win in quick time and in a feature race, the Group 3 Freestone Trotters’ Cup.

“Of course that’s how you want to do it,” co-trainer and driver Kate Gath said. “He was a different horse (compared to last time). He got to the line really well and did it easily.”

Tornado Valley’s win was his 39th from 108 starts with another 31 placings.

And there’s more to come.

“There’s still a bit of life in him yet,” Kate Gath said.

Andy Gath added: “With respect to the horses he beat tonight, if he didn’t beat them then it probably would have been the end, but he didn’t just beat them, he won easily.

“We’ll know when it’s time to retire him, he’ll tell us, but it’s not yet, not on how he won tonight.

“The win proved he’s still got plenty left and he loves being in work and around the stables.

“You think about another go at the Great Southern Star with him, it’s not that far away, but he’ll tell us if we give it another go or not.”