Time Up The Hill flying ahead of Jewels 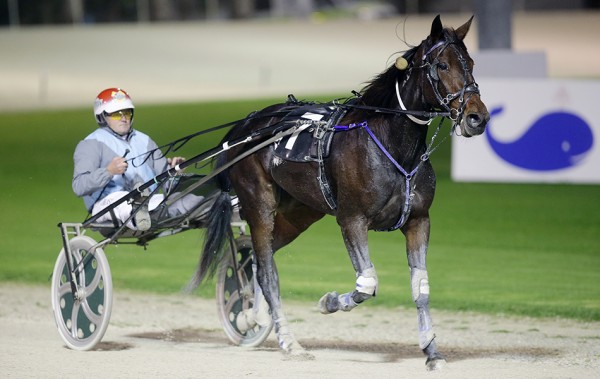 While the Craig Edmonds-trained Five Wise Men has dominated the three-year-old features and will head into next month’s race with the yellow jersey and favourite’s tag, Time Up The Hill is proving he won’t get it all his own way.

The Michael Ward-bred, trained, and owned filly ran him to within a nose in the Gr.1 Northern Trotting Derby (2700m) at Alexandra Park last month before winning the Gr.3 Northern Trotting Oaks (2200m) last week.

She was once again at her brilliant best at the Auckland track on Friday night, with the daughter of Muscle Hill setting a new New Zealand record when winning the Garrards Horse & Hound Pukekohe Handicap Trot (2200m), and in the process putting her age group on notice heading into the Harness Jewels at Cambridge Raceway on June 6.

Off her 10m handicap Time Up The Hill settled towards the rear of the field for driver Ken Barron before she was asked to improve three wide when heading down the back straight for the final time.

The pressure told on leaders Mufasa Metro and I See Fire in the closing stages, with I See Fire breaking with 70m to go, allowing Time Up The Hill to secure a half-length victory over The Big Bird, with a further 1-1/2 lengths back to Mufasa Metro in third.

The ever-pragmatic Ward said there is still plenty of work to do prior to the Jewels, but he admitted to being pleased to set a new age group national record with his filly.

“She has done a couple of national records but they were never recognised because she didn’t win, at least this way she at least gets one – I like that, she deserves it,” Ward said.

“She put the pressure on and Ken (Barron, driver) reckons she was starting to run away from them. She went well.

The win continues her improving northern form, where she has won two of her four starts in Auckland.

“She has thrived up here,” Ward said. “The first couple of weeks she took a bit to eat everything, but now she will eat you out of house and home. She is well settled in, and so have I.”

While enjoying his time in Auckland, Ward will head home to his West Melton property for a few days before overseeing the final stages of Time Up The Hill’s Jewels preparation.

“I am going back tomorrow to wean some foals,” he said. “I have got to wean her half-brother by Volstead and I am back again on Wednesday until the Jewels.”

Later on the card, Amazing Dream finally bested Copy That after finishing behind the talented entire in their previous two meetings.

It was a special occasion for her driver Olivia Thornley, who was having her first raceday drive behind the multiple Group One winner in the absence of regular drivers Mark Purdon and Natalie Rasmussen.