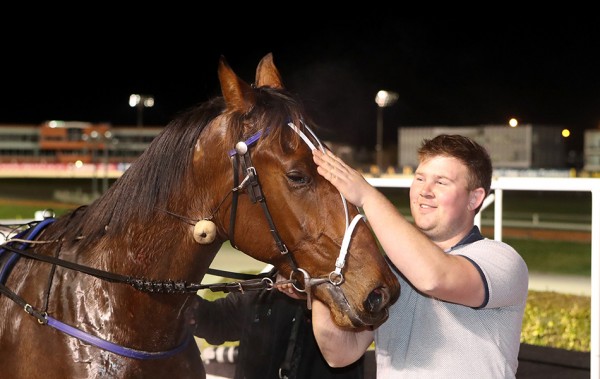 A $9,501 purchase is proving to be the best decision of young trainer Michael Purdon’s burgeoning career.

When perusing a Gavelhouse auction catalogue last year, the West Melton horseman’s eye was caught by the breeding of Mystic Max, having been a fan of his sire, French stallion Village Mystic.

Purdon duly secured the yearling out of the famed Robinson family, but when it came to selling down shares in the colt, Purdon had no takers.

While it was deflating at the time, it has worked out in Purdon’s favour, with the juvenile trotter now boasting more than $36,000 in earnings after his victory in the Gr.2 Sires’ Stakes 2YO Trotting Championship (1980m) at Addington Raceway on Friday.

“I tried to sell shares in him in the early stages, but I couldn’t get anyone interested. It has now worked out really well owning him outright,” Purdon said.

Starting from the outside of the front-row, Mystic Max was taken back early to take a sit for driver Blair Orange, with hot-favourite Highgrove breaking early.

Orange continued to sit patiently behind his colt until he asked him to improve on the back of Mr Love three-wide down the backstraight.

Mystic Max found clear running room down the home straight and ran over the top of his rivals to win by a half-length over Wy Fi, with a further three-quarters of a length back to Mr Love in third.

While his chances were aided by a breaking Highgrove, Purdon said manners are a huge factor when it comes to juvenile trotters.

“None of these juvenile trotters are really bombproof, they all have their little hitches,” Purdon said. “We were just fortunate enough tonight that Mystic Max put it all together.

“He is nice and kind, and he is showing he is pretty versatile now, with his first win leading up, and tonight’s win coming with a sit.”

The result now evens the ledger between Mystic Max and Highgrove at two wins a piece, with the Gr.1 Montana Food & Events 2YO Ruby (1609m) at Cambridge Raceway on June 6 set to be the tiebreaker.

“It’s very exciting,” Purdon said. “There will be a bit of pressure on him, but it is still a big thrill nonetheless.”

While looking forward to the Harness Jewels, Purdon will savour Friday’s victory, his first at Group level.

“It’s a massive thrill to get that Group win,” he said. “My last big win was a Listed race, the Harness 7000 with Willie Go West.”

Mystic Max’s victory on Friday night was also an important one for his sire Village Mystic, with the Haras des Trotteurs stallion now boasting a record of 100 percent Group winners-to-runners in New Zealand, albeit Mystic Max being his only representative.

Buoyed by the success on Friday, Purdon is keen to get some more European blood into his stable in the future.

“The European blood has always done a good job here with the likes of Love You, and Village Mystic is a son of Love You, so it’s good seeing that bloodline coming through,” he said.

Later on the card, Outamyway filled the coffers of his connections ahead of the Gr.1 Mitre 10 3YO Ruby (1609m) next month when winning the Listed NZB Standardbred Harness Million 1 – Final (1980m).

The Paul Nairn-trained colt set the pace throughout and was able to hold on bravely to defeat Regal Attire by a nose, with a further 1-1/2 lengths back to Leaf Stride in third.

Outamyway was purchased out of White Stables’ 2019 NZB Standard National Yearling Sale in Christchurch for $17,500.