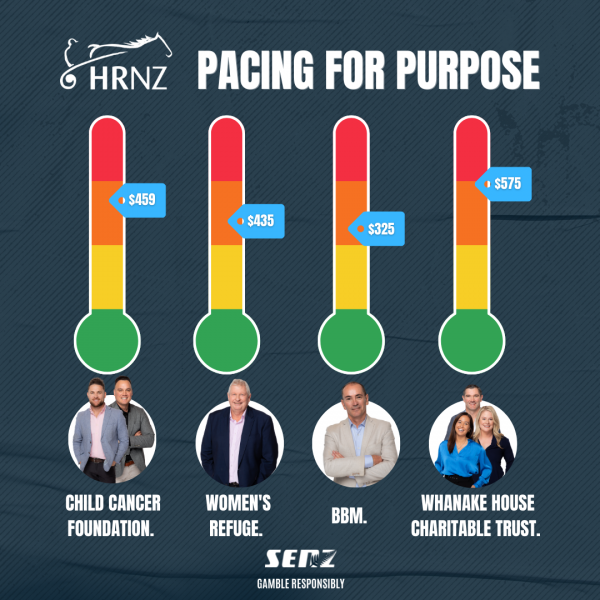 With three more collects at Winton yesterday, the SENZ radio punting competition “Pacing For Purpose” is getting close to the $2000 mark.

Every week four separate shows on the sports network spend $50 on harness racing meetings of their choice, with the proceeds going to their charities.

The Drive Time hosts of Stephen Donald, Kirstie Stanway and Rikki Swannell lead the way so far, with a total of $575 for their charity, the Whanake House Charitable Trust that helps young adult with disabilities.

Yesterday they got $70 back from the $50 they invested on the aptly-named Mr Cash Man for trainer-driver Nathan Williamson.

Nathan's father Phil also drove a winner with Harry Stamper getting home. Luckily the Breakfast crew of Brendon McCullum and Izzy Dagg had put their $50 on the trotter, getting $145 back.

The day's other successful bet was on hot favourite Nutcracker, returning $65 to Mornings hosts Ian Smith.

Overall "Pacing for Purpose" has now raised $1794, and will run through to January next year.

The radio personalities make their choices every Thursday or Friday depending on what meetings they have selected, and then there’s the tally up (complete with bragging rights) that follow.

Tune in to SENZ to hear their next selections, and don’t forget to listen to the Kiwi harness racing show “Trots Talk” hosted by Michael Guerin and Greg O’Connor every Sunday from 12 – 1 pm.