The Hulk gets 100 for Matthews 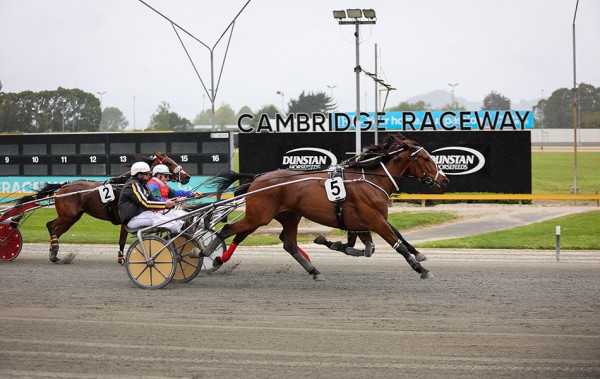 It was appropriate The Hulk gave trainer Adrienne Matthews her 100th training success at Cambridge on Sunday.

Because not only has the veteran trotter been responsible for 8 per cent of those career wins but he is also a family favourite who holds a special place in Matthews’s unique training operation.

“He is like a family pet and one of the quietest, nicest horses you could ever have around,” says 42-year-old Matthews.

“Because of that he is our son Millar’s favourite horse and the one he gets to lead around the stable.

“So there was never much chance he was going to get sacked or sold, even if he went through a bad patch.”

Matthews had to watch from home on the wrong side of the Auckland border as Fergus Schumacher guided The Hulk to win the R51-55 mobile trot by a head, unable to travel to the races like all in the region.

“We have had him since he was a weanling and that is basically how we run the stable now,” explains Matthews.

“We deal mainly with horses who are bred here, the mares get in foal here (AI) and foal down here so we have them all the way through so any wins are very satisfying.

“We still take outside horses and also often put other people into the horses we breed so they can enjoy going to the races.

“But I am lucky that I can run the stable like that and have 10 horses in work because Matt (Stormont, partner) has a real job,” laughs Matthews.

Matthews has been training in her own right “for around 15 years” after starting with her grandfather Cliff Thorburn then working for Ken Sefonte, Ray Norton and a long spell with Geoff Small.

“We have family involved now and I am still loving training and we wil be putting four mares in foal this season.”

The popular trainer’s milestone was the highlight of the Cambridge twilight programme on which the trotting races took centre stage.

The kings of Cambridge trotting races Graeme Rogerson and Dylan Ferguson got a trotting double with Delson winning by six lengths and Funny Face by seven lengths.

The maiden trot which brought the programme to a close also saw a horse to follow in Del Shannon, a son of Muscle Hill winning well for trainer-driver Nicky Chilcott who suggest the bold-going three-year-old has a bright future.